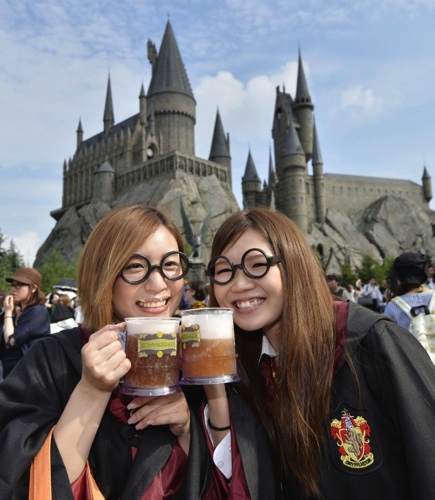 USJ Co. is counting on its cachet turning around a failing Universal Studios theme park in Japan to win a partnership with a foreign casino operator, as the country edges nearer to legalizing gambling resorts.
The operator of Osaka city’s 13-year-old Universal Studios Japan is in talks with MGM Resorts International, Caesars Entertainment Corp. and Genting Bhd. for a possible partnership to run a casino resort in the Asian nation, Chief Executive Officer Glenn Gumpel said in an interview.
“We have operational capacity, experience know-how, and I don’t think we would be stretched to participate in more than one” casino resort, Gumpel said at USJ’s headquarters located inside the park. “As a company, we would like to grow outside of the current confines of the theme park.”
Japanese Prime Minister Shinzo Abe’s ruling party is seeking to pass a law to legalize casinos in the parliamentary session starting autumn, as part of plans to boost tourism along with the Tokyo Olympics in 2020. Operators including MGM, Caesars and Las Vegas Sands Corp. have expressed interest to take part once the ban is lifted and pledged to spend billions of dollars to build a resort.
USJ joins Japanese companies such as Sega Sammy Holdings Inc., Konami Corp. and Dynam Japan Holdings Co. competing for partnerships with casino operators in a market that could be Asia’s second largest after Macau and worth $40 billion a year as early as 2025. The company is hoping its experience operating a theme park and knowledge of marketing and entertainment will help it to stand out from other suitors.
Osaka, a port city in western Japan, has been in talks with operators including Caesars and MGM for a 500 billion yen (USD4.9 billion) resort, probably to be sited on a reclaimed island about 5 kilometers (3 miles) from USJ’s park. Other local governments including Tokyo, Yokohama, Hokkaido, Nagasaki and Okinawa have also expressed interest in hosting the resorts.
USJ is looking at Tokyo, Osaka and Okinawa for potential sites and would consider building a casino resort or a new theme park in Neo Park Okinawa, a nature park owned by Nago City, according to Gumpel, who joined the operator in 1999.
The company could seek to re-list on the Tokyo Stock Exchange as early as next summer as one of its financing options, and is also considering an overseas listing, the executive said on Aug. 7.
USJ had sales of 95.9 billion yen in the year ended March, an increase of 17 percent from a year earlier, according to spokesman Johta Takahashi. Operating profit jumped 51 percent to a record 24.2 billion yen, he said.
USJ, which opened in 2001 as a joint venture between the city and a group of private companies, introduced movie-themed attractions based on Hollywood classics such as Back to the Future and Jaws. The company was listed in 2007 but was taken private by Goldman Sachs Group two years later as the park’s appeal faded and the number of visitors slumped.
The theme park has since recovered as new rides such as Space Fantasy were brought in, with visitor arrivals hitting 10.5 million last fiscal year, the second highest number since it opened. A new Wizarding World of Harry Potter attraction, which opened last month at a cost of $400 million, drew 870,000 visitors to the park in July, a record for the month.
USJ is also planning to expand beyond Japan to invest in the emerging markets of China and Indonesia, and is seeking a tie-up with Shenzhen-based theme park operator Overseas Chinese Town. The company’s held talks with an Indonesian company for a theme park in Jakarta, capital of Southeast Asia’s most populous country, Gumpel said. Bloomberg