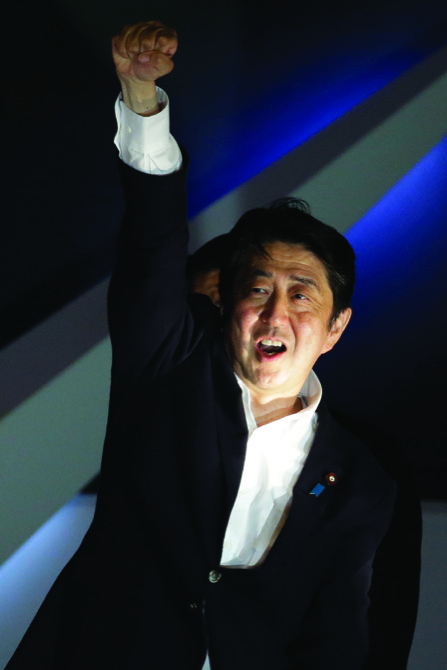 Japanese Prime Minister Shinzo Abe was re-elected as head of his ruling Liberal Democratic Party in a landslide election last week, paving the way for up to three more years as the nation’s leader and a push for his long-awaited plan to bring recently-approved integrated resorts to Japan.

The prime minister has been a long-time advocate of integrated resorts in the country, believing that they will be a key driver for tourism and employment, but he has had to overcome stiff opposition from his party’s junior coalition partner, Buddhist Komeito.

Having finally obtained the green light from the Japanese Diet earlier this year, Abe’s re-election will add to investors’ confidence that the integrated resort licenses are indeed on their way.

At least one casino investor has already digested the good news.

On Friday, Philippines-based Tiger Resort became the latest casino operator to announce its interest in acquiring a casino license. The company, which operates the Okada Manila casino resort, is currently embroiled in an ownership dispute with Japanese businessman Kazuo Okada.

Macau’s own Lawrence Ho, chief executive officer of Melco Resorts & Entertainment, who also wants in on Japan, said that his decision to sell the company’s stake in a Vladivostok-based casino last year was mainly to improve his chances of winning a casino license.

Integrated resort openings will be limited to just three locations initially – Tokyo, Osaka and Hokkaido – and they could start opening to the public by 2025.

The Japanese government intends to limit the floor space of gambling areas to just 3 percent of the resort’s total floor space, and locals will be required to pay an entry fee of 6,000 yen and be subject to visitation frequency limits of up to three times a week and 10 times over four weeks.

But those restrictions do not deter investors, who are keen to get involved in the country of 127 million where as many as 8.5 percent say they play recreational arcade game pachinko. The visitor market is equally attractive. Last year, Japan welcomed 28.7 million tourists and the government is aiming for 40 million by 2020.

Some analysts suggest that, even with its very restrictive gambling legislation, the casino market in Japan may soon be worth as much as Macau’s.

Abe, who has been prime minister since December 2012, has cemented control of his party and is poised to become Japan’s longest-serving leader in August 2021.

He has several policy challenges, including dealing with Japan’s aging and declining population, a royal succession in the spring, and a consumption tax hike to 10 percent he has already delayed twice. He also wants to pursue his long-sought amendment to Japan’s U.S.-drafted pacifist constitution, although the hurdles remain high and doing so would carry political risks.