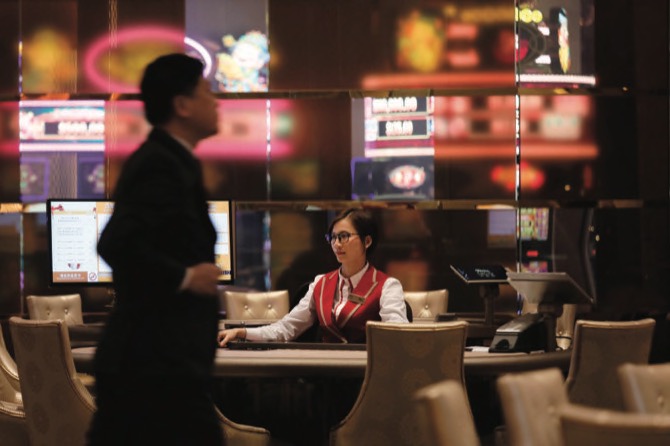 Morgan Stanley analyst Thomas Allen writes that the firm is now expecting revenue to grow by 1 percent in 2019, up from his prior forecast of a 2 percent contraction. The improvement will be fueled by mass market growth of 7 percent, expects Allen, significantly higher than his earlier forecast of 2 percent. The mass market segment will find support from accelerated visitation growth following the opening of the Hong Kong-Zhuhai-Macau Bridge, as well as analyst predictions for the Chinese yuan to appreciate against the U.S. dollar over the course of 2019.

Macau gross gaming revenue for the first two months of 2019 amounted to MOP50.31 billion, a 0.5 percent contraction from the same period in the previous year.

JP Morgan analysts DS Kim and Sean Zhuang say they expect the minor contraction in the first two months to extend into March and April, writing, “for the first time in three years, we forecast industry EBITDA to print negative growth both quarter-on-quarter and year-on-year in the first quarter to second quarter of 2019, driven not only by [expected] anaemic GGR momentum, but also by relatively soft margins.”

The analysts predict that there won’t be any near-term positive gains in gross gaming revenue, asserting that the growth comparison of March and April was “very tough given [an] unfavorable calendar year-on-year.”

The analysts are holding their previous -1 percent growth forecast for 2019, adding that the economic sector should see a healthier year in 2020. By segment, JP Morgan expects 5 percent growth in mass and a 7 percent decline in VIP this year.

Credit Suisse is also betting on the mass segment to fuel growth this year. It projects earnings drivers to take effect in the second half of the year, citing liquidity relaxation in China, stronger passenger flow via the HKZMB and a lack of new property supply until 2020.

The brokerage firm projects Sands China and MGM China will gain in the VIP market at the expense of Wynn Macau and Galaxy Entertainment.

The latest data shows that Galaxy and Wynn still dominate in Macau’s VIP sector, with shares of 27.6 percent and 20 percent of the pie respectively. Sands China and Melco Resorts & Entertainment each control around 15 percent, while SJM and MGM trail at 14.6 percent and 7.2 percent respectively.

Morgan Stanley’s Allen writes that Las Vegas Sands remains his preferred operator and that analysts are wrong in assuming it will lose market share in Macau. Accounting for both VIP and mass, Sands China ties with Galaxy at 23.1 percent of the pie.

Data shows manpower demand on the up again

The number of full-time employees in the gaming sector (excluding junket operators) increased 1.1 percent year- on-year to 57,246 in the fourth quarter of last year, according to the latest information from the Statistics and Census Service, with the number of croupiers rising at the same rate to reach 24,719.

In December 2018, average earnings (excluding bonuses) of full-time employees in the gaming sector were MOP23,740, up by 3.5 percent year-on-year, with the average earnings of dealers increasing 3 percent to MOP20,450.

Some 1,700 new employees were hired in the fourth quarter, about 14.4 percent more than in the same quarter of 2017, according to the data. The employee recruitment rate (3 percent) and the job vacancy rate (2.3 percent) rose by 0.3 percentage points and 1.5 percentage points respectively year-on-year. According to the DSEC, these indicators reflect an increase in demand for manpower in the gaming sector.

Accordingly, there were 1,321 job vacancies in total at the end of the fourth quarter of 2018, up by 861 year-on-year. Slightly over half of the vacancies were for clerk positions, including 445 vacancies for croupiers. DB