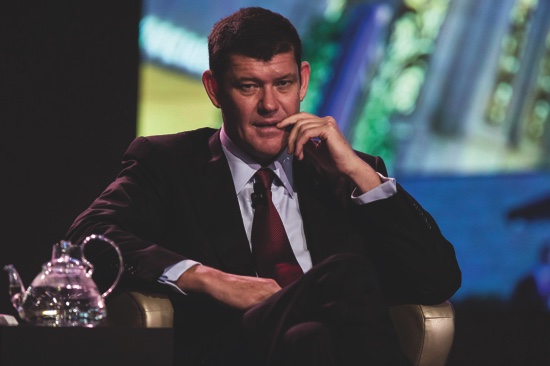 The sale of Crown Resorts’ USD800 million stake in its Macau venture, reported yesterday by the Times, is fueling speculation that James Packer is preparing to buy back some assets in Australia.
Crown is selling the shares back to Melco Crown Entertainment Ltd., cutting its stake in the company to 27 percent from 34 percent. Packer will resign as co-chairman of Melco Crown and become deputy chairman, the Hong Kong-based company said late Wednesday.
Crown is reducing its commitment in Macau despite saying in 2015 the company had “great faith” in the territory. Packer last year held talks with private-equity firms and pension funds about a possible buyout of some Crown assets, people with knowledge of the matter said in December.
“I’d say there’s definitely something lurking in the background,” said Sam Fimis, a wealth adviser at Patersons Securities Ltd. in Melbourne. Cash from the stock sale gives Packer more options, he said.
A spokeswoman for Melbourne-based Crown didn’t immediately return a call seeking comment on a potential buyout by Packer.
Crown shares climbed 5.6 percent to A$12.48 as of 11:52 a.m. in Sydney, giving Crown a market value of A$9.1 billion ($6.8 billion). The stock is down 6.8 percent in the past 12 months.
Crown said in its statement that proceeds from the share sale would initially be used to cut net debt, before the company considers returning funds to investors. As Crown’s controlling shareholder, Packer is in line to receive the bulk of any one-off dividend.
“Crown will assess its capacity to make a distribution to shareholders, and at the same time maintain a strong balance sheet and credit profile to fund existing Australian development projects,” the company said.
Crown is currently rated two levels above junk by the three major credit assessors, with a stable outlook. The cost of protecting Crown debt against non-payment more than doubled to 287 basis points in the 12 months through Wednesday, the biggest increase in the 25-member Markit iTraxx Australia index of credit default swaps.
Melco, part-owned by billionaire Lawrence Ho, the son of Macau gaming mogul Stanley Ho, in October opened the Hollywood-themed USD3.2 billion Studio City resort that features a giant Ferris wheel and virtual Batman ride. Macau casino operators are seeking to draw more tourists as the anti-graft campaign scared off Chinese VIP players.
Gambling revenue in Macau fell for a 23rd straight month in April, hurt by China’s slowing economy and a government crackdown on graft.
“It’s no secret that Crown does have a very robust development pipeline,” Ho, chairman of Melco Crown, said on a call with analysts after the company’s earnings on Wednesday. “They don’t make a secret that there are some interesting opportunities for them back home and also in Las Vegas.”
Melco Leisure & Entertainment Group Ltd. will become the single largest Melco shareholder after the repurchase, which was made at a 1.6 percent premium to the Tuesday closing price of the American depositary shares, the company said in a separate statement.
Crown executive vice president Todd Nisbet will resign as Melco’s director, with its board then comprising three Melco representatives, two Crown nominees and four independent directors with Ho as chairman, it said.
Consolidated Press Holdings Pty, Packer’s closely held investment vehicle, owns 53 percent of Crown, according to data compiled by Bloomberg. The billionaire in August stepped down as the Australian company’s chairman to focus on developing the company’s new projects, which include a casino being developed in Las Vegas and a hotel for high rollers on Sydney harbor.
Melco Crown on Wednesday reported first-quarter revenue of $1.1 billion, a 5 percent increase from a year earlier. The company attributed the growth to Studio City, which started operations in Macau in October, as well as City of Dreams Manila, which began last February. Those gains helped offset lower revenue at both City of Dreams and Altira Macau, it said. MDT/Bloomberg