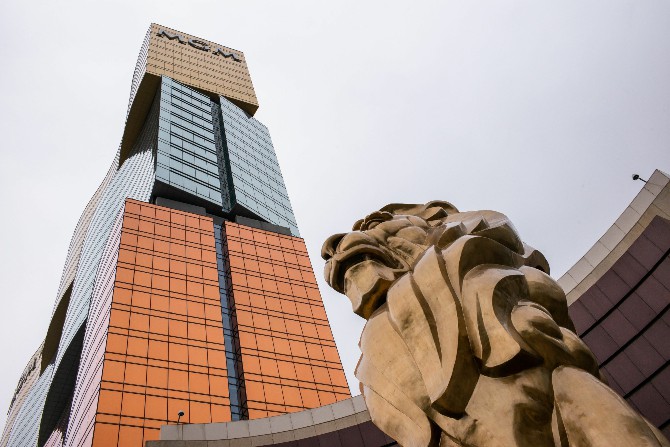 The gross gaming revenue (GGR) raked in by MGM China Holdings Limited in the first quarter (Q1) of 2021 recovered to around 40% of pre-pandemic levels, or tally in the fourth quarter (Q4) of 2019 — surpassing the market recovery pace at 33%, according to the group’s latest financial report released yesterday.
The group’s market-wide GGR in Q1 2021 climbed by 8% from the preceding quarter, which was attributed to the strong performance seen in its premium mass segment, the group said.
From a yearly perspective, even though the GGR figure in the first quarter dropped by 22% compared to the same period last year — it represented an encouraging augmentation from a year-on-year fall-off of 70% in the previous quarter.
“It is evident that our strength in premium mass is positioning us well as the market gradually turns the corner,” as stated in the release.
In Q1, the improved GGR had given a huge impetus to help the group turn around, driving its total revenue to surge by 9% and hit HKD2.3 billion, equivalent to USD296 million.
During the same period, the adjusted property earnings before interest, taxation, depreciation, amortization (EBITDA) of MGM China posted a positive value of HKD84 million — a sharp uptick from the negative HKD123 million in the same reporting period last year.
Among the group’s two properties in Macau, MGM Macau on the peninsula was the most rewarding in Q1, with its revenue growing 17% year-on-year to HKD1.3 billion, and its adjusted EBITDA up 398% to HKD170 million.
In comparison, MGM Cotai located at the Cotai Strip posted revenue of HKD981 million in Q1 2021 — down modestly from HKD984 million in Q1 2020 — and a negative adjusted EBITDA of HKD86 million.
Both properties saw year-on-year increases in mass-market revenue, yet downturns in the VIP sector.
The main floor table games drop of MGM Macau and MGM Cotai celebrated with a 36.9% and 30.4% advancement to HKD4.67 billion and HKD3.43 billion, respectively.
On the contrary, the VIP table games turnover declined by 34.2% and 26.0% for MGM Macau and MGM Cotai.
“MGM China is confident in Macau’s longer-term growth prospects and will continue to invest in strengthening our market position,” Hubert Wang, president & chief operating officer of MGM China stated in the memo.
Full occupancy expected
during May Day Holiday
During the earnings call yesterday, Wang said the demand for the May Day Holiday from May 1 to 5 is “actually pretty strong,” and he is expecting an “almost full occupancy.
“It’s also very important to point out that the demand from our high-end customers remains strong from premium mass to in-house VIP. A lot of our suite products and villas are already overbooked,” he added.
The leader is also anticipating a greater momentum in recovery in the coming months, enabled by the rising vaccination rate and the possible resumption of e-visa applications.

New suites at MGM Cotai to launch this summer

In yesterday’s release, Hubert Wang unveiled that the construction of the additional suites in the South Tower of MGM Cotai is slated to open this summer.
The new attraction, estimated to cost around HKD677 million, is intended to strengthen the group’s foothold in the premium mass market, MGM China stated earlier.
To stay competitive and drive visitation, Wang also disclosed that the group is about to launch some themed property attractions.
“We will continue our effort and strategy in diversification, along with our meaningful entertainment assets and niche in art and culture. We are committed to helping Macau to develop into a world’s tourism destination,” said Wang.