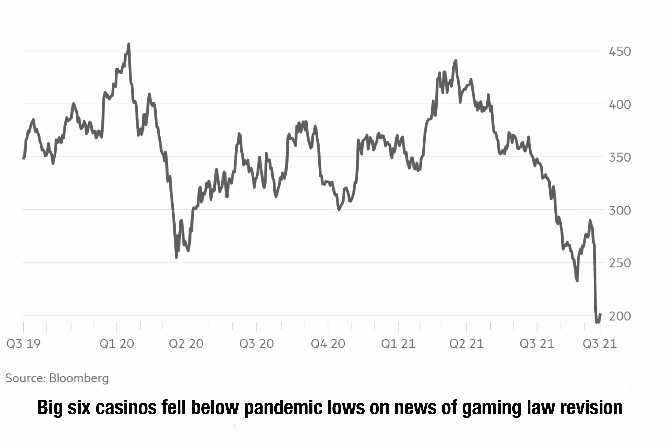 The city’s gaming operators and junkets are seeking clarity following the announcement of proposed changes to the SAR’s gambling laws which wiped out over USD18 billion in stock market value.
Early this week, senior casino and junket executives met with authorities – their only official opportunity to express their views during the ongoing gaming public consultation that will last for 45 days.
The meeting reportedly came at short notice, as executives who were not in the city failed to rush back in time to attend the meeting.
During the 70-minute meeting — which was streamed online — industry representatives and executives showed full support for the idea that the 20-year-old gaming law needs to be updated, and voiced support for Macau’s development as an international tourism hub, according to Reuters.
Casino concessions are due for re-bidding next year. However, the government has not yet provided guarantees that these will be renewed. Many have also called on the government to extend the validity of the concessions, which end in June 2022, due to the adverse effect of the pandemic on the industry.
An analyst expressed worries over uncertainty and risks amid the fundamentals in Macau already being “murky and incrementally difficult to analyze.”
J.P. Morgan gaming analyst Joe Greff has lowered his firm’s ratings for casino operators following policy changes.
According to Greff, Macau is “sort of requiring” the industry to boost its spending on non-gaming projects – not just in Macau but also in Hengqin – as a factor for concession renewal.
“Operators didn’t have much clarity on timing regarding concession renewals, though this does not seem like a big concern,’’ Greff said.
Last week, Secretary Lei Wai Nong announced that concessionaires will be under tighter scrutiny from the government which will have greater authority to verify the background of the staff hired by concessionaires as well as those hired by entities who work with them.
This includes oversight of those who seek to establish partnerships with the concessionaires.
For Lei, there were still some deficiencies in industry supervision.
On possible changes, Greff noted, “we think this adds in renewal risk and uncertainty to Macau.”
“While it’s unclear how strictly the government would control their capital, we believe the hefty dividends of pre-Covid-19 days, especially those from Las Vegas Sands and Wynn, would likely get scrutinized if not restricted,” Greff added.
On Wednesday last week, Sands China led the plunge, dropping as much as 32.5%. Wynn Macau tumbled 29%, followed by MGM China who gave up 27%, and local operator SJM Holdings dropped 24%. Melco International and Galaxy Entertainment Group dropped 20% each.
Casino stocks fell below pandemic lows following the announcement of gaming law amendments.
The worries of analysts and investors came amid a broad Beijing regulatory crackdown occurring across sectors, ranging from technology to real estate.
Beijing’s crackdown has already cut hundreds of billions of dollars from asset values.
“[The law is] part of the national policy to crack down on gambling activities and Macau is part of China,” Pedro Cortés, a partner at Macau legal firm Rato, Ling, Lei & Cortés, said, as cited in a report issued by the Financial Times. “It’s going to be a fresh era.”
The proposed gaming law would require casinos to increase the percentage of share capital held by permanent residents of Macau – an initiative to maximize the economic value of the industry.
Among the six gaming operators currently, only SJM, Galaxy and Melco are deemed as local Chinese companies.
A senior casino executive told the Financial Times that if the law passed as proposed, US casinos may have to make changes to how they are structured. “The American company can be a shareholder, but [they will become] more Chinese companies,” said a casino executive.
The Macau SAR’s gross gaming revenue plummeted to MOP4.44 billion in August, a drop of 47.4% from the previous month’s figures.