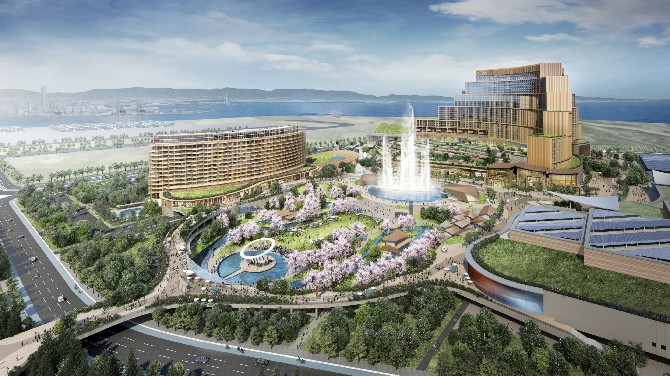 MGM Resorts International has announced that MGM Japan, together with its joint venture partner Orix, has been selected by Osaka as its integrated resort partner.
Osaka’s selection of the MGM-Orix consortium marks an important step in MGM’s long-term bid to develop one of Japan’s first integrated resorts.
“It is an honor to be selected as Osaka’s partner in developing an integrated resort. I commend the city in undertaking a comprehensive and thoughtful process to meet its goal of developing a world-class integrated resort in Osaka,” said MGM Resorts CEO and president Bill Hornbuckle in a statement.
“We will work closely with prefectural/city municipal governments to deliver an iconic, uniquely Japanese destination warranting Osaka’s selection as home to one of Japan’s first integrated resorts,” he added.
Details of the proposed approximately USD10 billion development were also unveiled, showcasing MGM’s vision to bring a “world-class resort experience” to Osaka, designed to transform the region into a top entertainment and hospitality destination.
The proposed location for the integrated resort is the waterfront on Osaka’s Yumeshima island.
“Nowhere is the future of tourism and hospitality more exciting than Japan, and Osaka is the perfect location for that future to begin. We couldn’t be more excited for the opportunity to help enhance and grow Osaka’s reputation as a world-class destination,” Hornbuckle added.
According to MGM Resorts, the company has had a full-time development team in Japan for more than seven years, “engaging with Japan’s business communities, [immersing itself] in Japanese culture and laying the foundation for a project that embodies Japan’s unique history and heritage.”
The planned hotels and amenities — MGM Osaka, MGM Villas, and MUSUBI Hotel — will have a total of 2,500 total guest rooms, approximately 400,000 square feet of conference space and approximately 330,000 square feet of exhibition space, including an “Innovation Laboratory.”
The next step is for MGM, together with Orix and Osaka’s prefectural and city governments, to submit an Area Development Plan to Japan’s central government during the October 2021 to April 2022 application period.
Integrated resort licenses are expected to be issued by the central government in 2022.
Osaka’s selection of MGM-Orix is one of several steps in the licensing process following the 2018 passage of Japan’s Integrated Resort Implementation Act.
On January 6, investment firm Snow Lake Capital published an open letter urging MGM Resorts International to sell off 20% of its MGM China stakes to a leading Chinese consumer or travel and leisure company – either of which would be regarded as a “strategic shareholder.”
According to the letter, this transaction would unleash capital for MGM Resorts to secure an integrated resort opportunity in Osaka, catapulting the group into position as the largest player in Japan’s gaming industry.