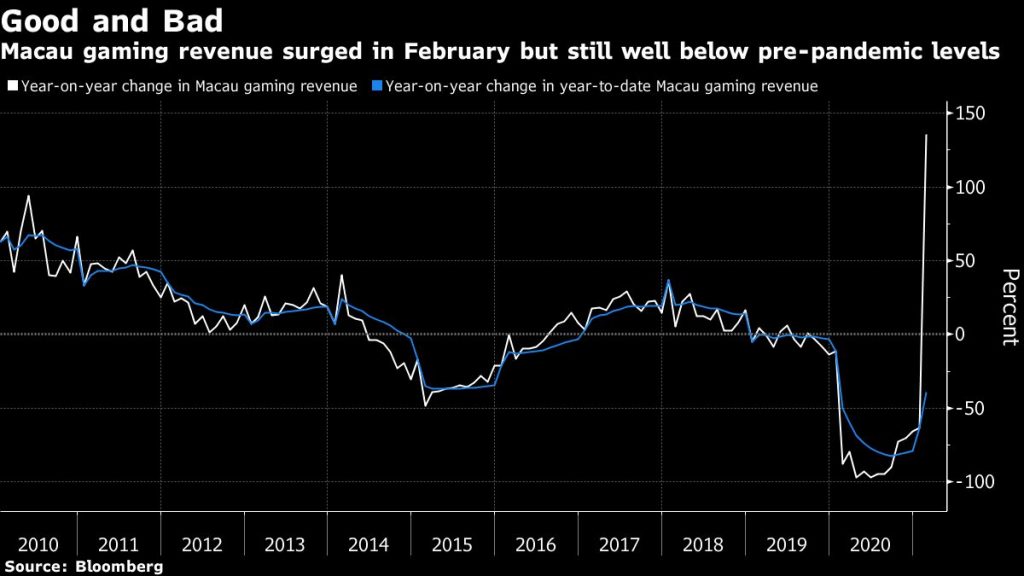 The city’s gross gaming revenue (GGR) surged 136% year-on-year to MOP7.3 billion in February, the month that last year saw casinos shut down for 15 days as the pandemic outbreak reached Macau following its initial appearance in the city in late January.
Data from the the Gaming Inspection & Coordination Bureau shows that the GGR fell 8.9% from the previous month, and is still down 71% from the February 2019 level.
Currently, gaming operators are only seeing a lukewarm recovery as the pandemic continues to make travel difficult for gamblers.
Macau’s tourism now solely relies on travelers from mainland China and Hong Kong due to Macau’s closure of borders to other countries and regions.
Currently, the city is still trying to lure mainland gamblers who are discouraged by a tightened visa application process and virus tests required for crossing the border.
The Lunar New Year holiday – one of the strongest weeks for casinos – was marred by an outbreak in northern China. Arrivals declined 65% from last year’s holiday week as Chinese officials urged citizens to stay home.
Previously, JP Morgan Securities (Asia Pacific) Ltd. predicted the GGR would stand at MOP3 billion for the first 15 days of February, equivalent to an average daily number of MOP200 million — a gaming performance that was regarded as “so far, so bad, as expected.”
Macau saw a total of 90,615 tourist arrivals during the seven-day Spring Festival from February 11 to 17, down 65.3% from 261,454 in the same period last year.
The average daily arrival numbers during the holiday stood at 12,945, falling short of the tourism bureau’s previous forecast of around 16,000 to 20,000 arrivals.
Gaming operators, however, are hopeful of the city’s economic recovery – despite the low turnout of tourist arrivals during the Chinese New Year.
Melco Resorts and Entertainment previously recently stated that the group remains “optimistic on the recovery in Macau and continue to expect increased visitation in the near-term,” placing bets on returning players.