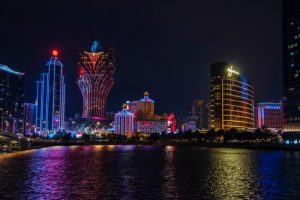 Macau’s April casino revenue dropped less than analysts estimated in a sign of stabilization as casinos shift their focus to attracting more casual gamblers and tourists.
Gross gaming revenue decreased 9.5 percent to MOP17.3 billion (USD2.2 billion), according to data from Macau’s Gaming Inspection and Coordination Bureau, marking 23 consecutive months of declines.
Casinos have been in a downturn since mid-2014 as China’s anti-corruption campaign and a slowing economy kept the country’s high rollers away from the world’s largest gambling hub. Still, the industry’s mass-
market revenue has started to bottom out since last year with narrowing revenue declines. Operators such as Galaxy Entertainment Group, Wynn Macau and Melco Crown Entertainment are strategically focusing on the more profitable mass-market segment of tourists and recreational gamblers with new resorts.
“The casinos produced another reasonable monthly revenue performance in what is a seasonally slower shoulder month,” Tim Craighead, a Bloomberg Intelligence analyst, said in an e-mail after the report. “It still looks to us that the business is stabilizing and the next big catalysts to watch for are the summer travel season and the new resorts from Wynn Macau and Sands China.”
The local government has encouraged casino operators to diversify their businesses and forecasts an increase in the proportion of casinos’ non-gaming revenue to 9 percent by 2020 from 6.6 percent in 2014, according to the region’s five-year development plan.
Other casino operators are also looking for new ideas to diversify their business from high-end gambling. The $4.1 billion Wynn Palace will offer air-conditioned cable car rides and Sands China Ltd.’s Parisian will feature a half-size Eiffel Tower replica when they open later this year.
While the mass market has seen some recovery signs, Macau casino operators are still exposed to the debt-ridden gaming promoters, who lend to high-stakes gamblers, as the local government continues to tighten its regulation on the industry, according to Hong Kong-based Daiwa analyst Jamie Soo. Junkets are still under significant operating pressure with at least HKD30 billion in bad debt still outstanding at conservative estimates, he wrote. MDT/Bloomberg