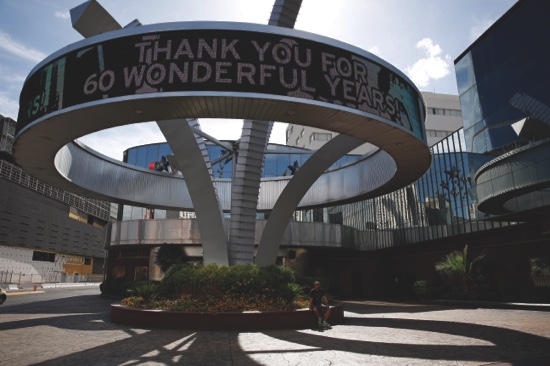 A sign thanks customers outside of the Riviera hotel and casino Monday, May 4, 2015, in Las Vegas

If the ghosts of Frank Sinatra and Liberace were still hanging around the Riviera Hotel and Casino on Monday morning (yesterday in Macau), they wouldn’t have found a seat at the bar.
Crowds squeezed onto barstools and milled about the casino floor saying goodbye to “The Riv,” a classic that spent 60 years on the Las Vegas Strip and closed at noon.
It’s an age reached by few properties along the four-mile stretch of hulking casino resorts mimicking other worldly landmarks or beckoning passers-by with all their wants in one place that have replaced Sin City’s recent past.
The Riviera’s only remaining elder was the often-renovated Flamingo that Bugsy Siegel debuted in 1947. The Tropicana, which opened in 1957, is close behind.
“The amazing thing about Las Vegas is how soon it forgets itself because it keeps reinventing itself,” said Jeff Kutash, the dancer, choreographer and producer who brought the aquatic stage spectacle “Splash” to a Riviera stage for 21 years.
The 60-year-old casino-hotel’s luster had faded, becoming the place to go for cheap drinks, cheap blackjack and a free photo-op in front with the ladies of topless revue Crazy Girls, posteriors immortalized with a bronze statue of their behinds.
But it wasn’t always that way.
Long before the buns of bronze were loaded onto the back of a pickup truck’s trailer Monday, the Riviera was among the first casinos to make this stretch of desert glitter. Like the others, mob money made sure the lights were always on at the Riviera.
Its star wattage started with bejeweled piano man Liberace, the property’s first headliner, and its marquee eventually included Frank Sinatra, Engelbert Humperdinck, Tony Orlando and Dolly Parton.
Rat Pack member Dean Martin was a part-owner for a short time. Another former owner married frequent Riviera performer and Golden Globe winner Pia Zadora.
The long-running stage show “Splash” brought water, fountains and pyrotechnics to a Las Vegas stage starting in 1985, long before Cirque du Soleil did.
Eventually, the Riviera’s casino became the set for “Casino,” the 1995 movie featuring Robert De Niro, Sharon Stone and Joe Pesci and based on real-life Las Vegas mobsters Frank Rosenthal and Anthony Spilotro during their 1970s heyday at the Stardust and others.
It served as Hollywood’s hangout for decades, from the Rat Pack in the original 1960 “Ocean’s 11” to the groomsmen of “The Hangover” in 2009.
After Monday, the property’s history, cinematic or otherwise, is bound for rubble. But it’s not clear when it might be leveled or how, either by demolition or the destination’s favored pastime: implosion.
The Las Vegas Convention and Visitors Authority bought the 2,075-room building and 26 acres it sits on in February for USD182.5 million plus $8.5 million in related transaction costs.
Furniture and fixtures inside the casino-hotel are expected to be auctioned by NCL, National Content Liquidators, starting May 14 until everything is sold.
The publicly-funded tourism agency plans to tear it down and expand the Las Vegas Convention Center to the Strip. The goal is to bring it down before the end of the year, said Heidi Hayes, a spokeswoman for the agency.
Kutash said he plans to watch when the Riviera turns to rubble. “And I’ll be toasting probably a glass of champagne to a memory that was more of a memory. It was a piece of my DNA,” he said.
He returned to the same stage one more time, a first since the show closed in 2006. “It was just a beautiful but ghostly experience,” he said of being on stage again.
The property has struggled in recent years as the recession hobbled Las Vegas and development around it went dormant, deterring walk-in traffic. The property hadn’t reported a profit since it emerged from bankruptcy in 2011. Kimberly Pierceall, Las Vegas, AP