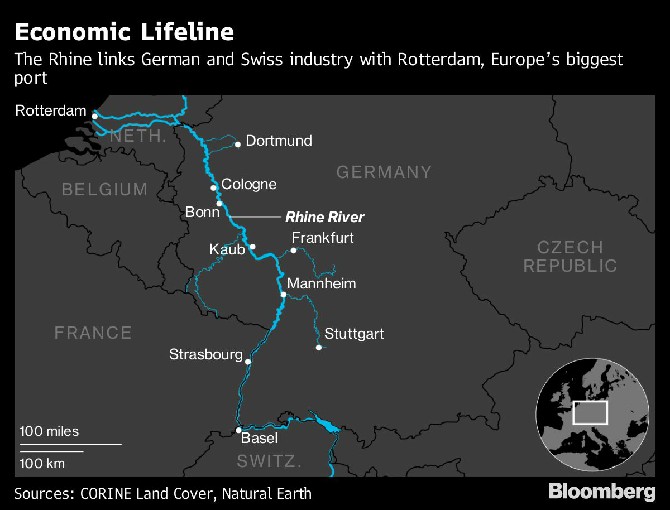 Two shipping brothers on Germany’s Rhine faced a dilemma that has become increasingly common on Europe’s most important river.
With the waters precariously low, Stephen and Torsten Mnich fretted over whether to haul 1,000 tons of potassium salt to a BASF SE chemical plant upriver — a lucrative assignment for the family business. If the level dropped further during the multi-day voyage in mid-August, they risked running aground. It was a toss up, and in the end, they called their mom.
“She has a feeling for the weather,” said 28-year-old Stephen, whose mother spent 27 years on a boat, raising him and his eight siblings. “She feels it’s going to rain, so we’ll be alright.”
But not all businesses reliant on the Rhine have a wily river oracle at their side, so Germany is pushing to secure commerce on this critical artery. The multi-pronged effort involves an elaborate model of the trickiest stretch, re-engineering boats and even mulling once-taboo new locks. After low waters forced shipping on stretches to all but cease two years ago, there’s a sense of urgency.
“2018 was a wake-up call,” said Jelle Vreeman, a shipbroker at the Rhine’s mouth in Rotterdam. “It will happen again. The German authorities don’t have a choice but to do something about it for the long term.”
Dotted with medieval fortresses and enshrined in German legend, the Rhine is an intrinsic part of the country’s mystique and a key part of its modern-day competitiveness. Around 30% of Germany’s coal, iron ore and natural gas is transported along the river, where factories are set up to take deliveries for just-in-time manufacturing. The disruption in 2018 contributed to a contraction in the German economy.
The Rhine provides cheap transport for Europe’s industrial heartland, snaking 800 miles through industrial zones in Switzerland, Germany and the Netherlands before emptying into the North Sea. There’s no real viable alternative. An average barge is capable of carrying 2,500 tons, while more than 110 trucks would be needed to carry the same load, clogging up Germany’s congested road and rail network.
Maintaining a reliable flow of goods and supplies is critical, especially as China targets Germany’s position as a leader in advanced manufacturing. The giant inland port of Duisburg on the Ruhr river, which connects to the Rhine, is the terminus of the Asian country’s massive Belt and Road infrastructure initiative.
Volker Wissing, transport minister for BASF’s home state of Rhineland-Palatinate, eyes construction of new factories in China and India with suspicion, worrying that Germany’s industrial strength could ebb if Rhine shipping suffers. Climate change threatens to make summers drier and reduce melt water from alpine glaciers, making river levels more volatile.
“We have to make sure that we maintain Germany as an important industrial location,” said Wissing, noting that barge transport is more environmentally friendly than trucks or trains.
His state is the site of the romantic mid-Rhine valley, where the Lorelei cliffs tower over passing vessels. It’s the toughest stretch for captains like the Mnich brothers. When they took turns steering their boat through the rocks last month, the depth gage at times showed less than one meter of water beneath the keel.
In this area of the Rhine, the German government wants to scrape off some of the jutting rocks and change the current so that ships can load an extra 200 or more tons. But the plan isn’t easy.
Engineers have to balance high- and low-water situations, shipping needs and environmental concerns. Because of the complex currents and topography of the river bed, German authorities constructed a scale model that’s nearly as big as a basketball court.
“I think no one has ever built something like this before,” said Christoph Heinzelmann, director of Germany’s Federal Waterways Engineering and Research Institute, showing a 90-degree curve in the Rhine and each detail of the riverbed.
Water streams into the model and takes red and white particles along that symbolize sand and gravel. One of the issues becomes quickly apparent: the sediment accumulates in the corner, blocking one side while sharp rocks limit the passage on the other.
“Finding a solution for this part of the Rhine is the Olympics of water engineering,” said Heinzelmann. “We know we’ll get there in the end, but can’t say which way yet is the best.”
Dredging out the sand wouldn’t be a long-term fix because the river would promptly fill it back, while regular digging would block the waterway, defeating the entire purpose of the effort. So engineers are thinking of changing the current below the surface so less sediment accumulates.
Retooling the fleet is another part of the plan. The German government wants to subsidize a retrofit of old barges to optimize them for lower water levels by 2021 — aid which is currently being reviewed by the European Union. Another project involves equipping barges with sensors to localize bumps in the riverbed.
That’s the preferred course for environmentalists. Their worst-case scenario is interrupting the flow of the river with new locks, an idea revived by German Transport Minister Andreas Scheuer. It’s highly controversial, and his colleagues in the Environment Ministry have rejected the plan.
But for those that ply the river like the Mnich brothers, any measure is worth considering to avoid a repeat of the situation in 2018.
As they made their way up river, they pushed their aging barge, which is better suited for low water because it’s small compared to more modern boats, as fast as they could to arrive at the rocky parts before the levels could fall again.
When they got there, some rocks were sticking out of the water at the sides, but their mother was right. The river was just high enough to let them pass. Elisa Miebach, AP