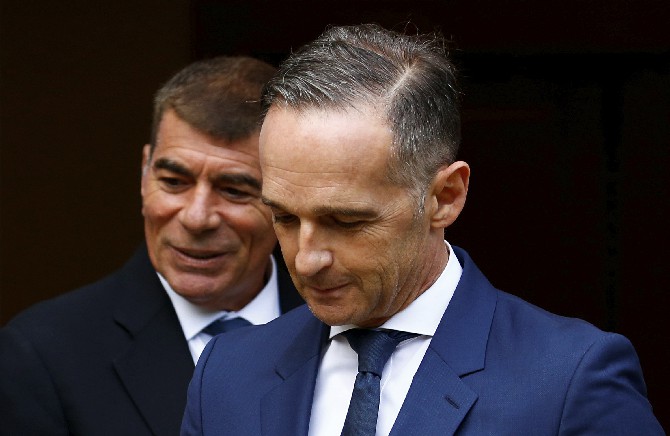 Foreign Minister Heiko Maas agreed with his Israeli counterpart yesterday that an effort must be made to extend a weapon embargo on Iran, while stressing Germany still sees the landmark 2015 deal between Tehran and world powers as the best way to prevent the country from obtaining a nuclear weapon.
With a current U.N. arms embargo on Iran due to expire on Oct. 18, Israeli Foreign Minister Gabi Ashkenazi told reporters in Berlin an extension was needed to prevent Iran from getting “more advanced weapons systems and spreading them around the Middle East.”
“We would like to see the European countries, not just Germany, preventing it,” he said. “It’s not helpful for the stability of the region.”
Ashkenazi was in Berlin to attend a two-day meeting of European foreign ministers at the invitation of Germany, which holds the European Union’s rotating presidency.
The United States wants a full extension of the embargo on Iran, which would almost certainly be vetoed by Russia and China in the U.N. Security Council, Maas said.
Germany and others are currently trying to find some middle ground that would meet with Russian and Chinese approval — and not be vetoed by the U.S. in the Security Council.
“We are trying to reach a diplomatic solution so that there will be an arms embargo on Iran in the future,” Maas said.
At the same time, he said Germany still sees the Joint Comprehensive Plan of Action signed with Iran in 2015, promising the country economic incentives in exchange for curbs on its nuclear program, the best deal to prevent the country from developing an atomic weapon.
Israel is against the deal, and the U.S. pulled out unilaterally in 2018, leaving the others involved — Germany, France, Britain, Russia and China — struggling to keep it alive.
Maas said concerns outside the JCPOA, like Iran’s ballistic missile program and influence in Syria, Lebanon and Iraq, need to be addressed, but that “we want to preserve the JCPOA to prevent Iran from obtaining a nuclear weapon.”
“Iran must change its approach in the region, we are not naive about Iran,” he said. “We know that Iran plays a dangerous role.”
The two ministers met at the House of the Wannsee Conference memorial, a villa in southwestern Berlin where senior Nazis and bureaucrats coordinated plans for the Holocaust in 1942.
Ashkenazi said that as the son of a Holocaust survivor, it was particularly emotional for him to visit the place where the “evil and cruelness” of the genocide of 6 million Jews was plotted.
Maas said anti-Semitism still exists in Germany today, and the memorial serves as a reminder that “we should fight it with available means.” AP