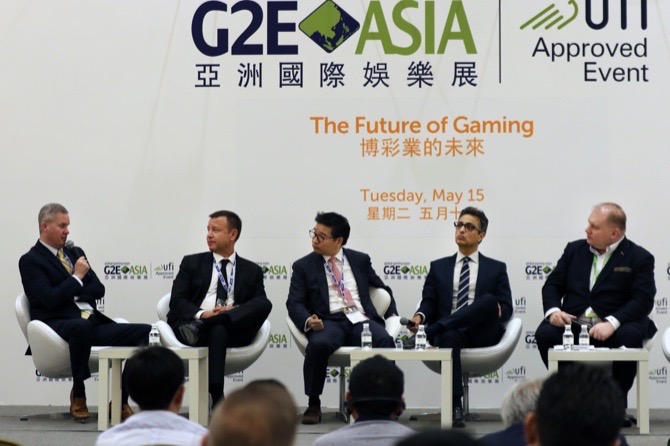 As part of the Global Gaming Expo (G2E) Asia event that kicked-off yesterday at the Venetian’s Cotai Expo, a forum was held to address the “future of gaming,” with specific focus on the Asian markets.

In the first part of the forum, dedicated to North Asia, Japan was in the spotlight, with a panel composed of several gaming specialists addressing what, in their opinions, were the challenges and advantages of the development of integrated resorts in the Japanese market.

Although there were several non-consensual and even contradictory opinions expressed by different specialists, in one topic a consensus was reached: there is still a long way to go until a clear definition on how this new and potentially enormous Asian market will operate in terms of its rules and regulations as well as on whether to integrate the traditional Japanese gambling “Pachinko” rooms into the new system.

Gaming analyst Grant Govertsen said, “the tightening of the market for games like Pachinko [which has had its revenues drop to about one-third of what they used to be in peak years] can serve as a warning for the need of a clear definition of rules and regulations.” He noted this as a potential risk for investors interested in investing in a market that he thinks will be “potentially the biggest Asian market after Macau.”

On the opposite side was another well-known gaming specialist, Alidad Tash, senior vice president of Gaming & Strategy at 2NT8 Limited, who said, “I see this as a huge opportunity,” and noted that Pachinko parlors are “very anti-social gaming” places where players are immersed into an “overwhelming sensorial environment where the music is [too] loud.” He continued, “Everything from this game is completely different from table games.” Tash agreed with Govertsen that the Pachinko industry has registered a steady decline recently, saying that it was “in consequence of being under attack from several politicians.” His view is that Pachinko constitutes “anti-social, non-attractive gaming” that does not even allow one to collect cash after one wins, forcing winners to trade “gifts like dolls and lighters and others things for money.” The Pachinko parlors “generated last year USD30 billion in revenue, four times that of Las Vegas [GGR] and only 9 percent less than Macau.”

The message that Tash wanted to send was that if what he considers to be an unattractive, complex gaming system could generate such huge interest, a proper resort and casino should be “even more appealing” for gamblers.

As for the most “unresolved” issue regarding the implementation of casino gambling in Japan, Tash stated that “the percentage of foreigner ownership … [is] for me the biggest mystery.” He added that other issues such as whether using junkets or the implementation of a “VIP-only” casino system may cause some issues, but that the major issue will be ownership.

“We have [much] experience in Asia where companies do not play well with partners, moreover with multiple partners,” he noted, stating that it is likely that if a local share of investment in the projects occurs, it will come from a bundle of multiple partners potentially without a real interest or any experience in the gaming industry.

Eric Landheer, executive director, Summit Ascent Holdings and William Shen, Senior Vice President and Managing Director, Korea & Japan, Caesars Entertainment Corp, agreed, saying “the next year or two will be very important in such definition [of the reaction of the local market and partners] as a [gaming] company can’t just go in as a western corporation without a Japanese partner or partners,” Shen added.

“I think we will [see] this dance […] continue for quite some time before we actually get […]clarity or ‘marriages’ if you will between international and Japanese partners,” Tash added.

Another of the focus points considered of high relevance was that of policy. “Do you have a policy environment that is supported of your development? Do you have a policy environment that will allow you to grow and to have a respectable return of investment?” Landheer said, recalling the process that led his company to establish the first resort in Russia’s Far East near Vladivostok. “That’s my question; what will be the policy in Japan?”

Moratorium on new licenses in the Philippines opens doors in Cambodia

The moratorium order recently issued by Philines president Rodrigo Duterte, which halts the issue of any further land development licenses for gaming, opens doors to new developments in the South Asia region, especially in Cambodia, according to the panel of experts at the second part of the forum dedicated to South Asia.
A new regulatory bill regarding Cambodia, not yet approved, was introduced by lawyer Rui Pinto Proença, a partner of MdME Lawyers, a lawyers office in Macau that was involved in the process of creating the bill.

Proença noted that, if the changes are approved, the bill will regulate three different areas in Cambodia: specifically, the areas that already have gaming venues, near the borders with Vietnam and Thailand, but that the bill will create a “[unique] opportunity in Asia, with a ‘strip’ by the beach,” located only about 10 minutes drive from the airport. This way a clear alternative to the currently-suspended development of casino resorts in Boracay, in the Philippines, is created. Panel member Marie Antonette Quiogue, senior associate at Romulo Lawyers, said there was uncertainty in the laws regarding nature conservation in the areas, which might block potential developments.

Questioned as to which market, whether Vietnam or Cambodia, might offer better conditions for investment, analyst Ben Reichel, executive director at Donaco International Limited, said Cambodia would be more advantageous. This was due to current government measures enforced by the Vietnamese government relating to the access and oversight of gambling activities by locals,  which might make Vietnam less attractive in South Asia in the long run.