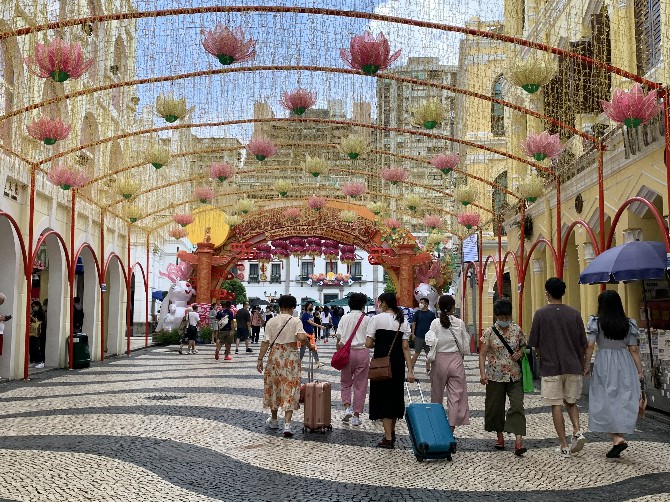 The just-concluded week-long National Day holiday often dubbed Golden Week was an extraordinary one for the Macau Special Administrative Region (SAR) – a city highly dependent on tourism — due to the blows dealt by Covid-19.
Since September 24, the SAR has reported 10 Covid-19 cases. From September 26, travellers who enter neighboring Macau from the mainland city of Zhuhai via the land border have been required to undergo 14 days of quarantine.
As a result, the city was quiet during the Golden Week holiday, in sharp contrast to the period in previous years. Few people were seen at famous tourist spots such as the Ruins of St. Paul and the Senado Square, which were once known to be crowded with tourists.
Official figures showed that there were only 8,159 tourist arrivals recorded during the holiday, typically one of the city’s busiest times.
Average daily tourist arrivals were 1,166, a stunning decline of 94% compared to last year — a disappointment for local retailers and the tourism sector generally.
Figures from the Public Security Police noted that in 2020 visitor arrivals were some 156,300 between October 1 and October 8.
Nevertheless, the average daily number of visitors during the holiday last year dropped by 86% compared to the same period in 2019.
Fong Kin Fu, board chairman of the Federal General Commercial Association of Macao Small and Medium Enterprises, said business owners had expected this holiday to make up for the losses they suffered earlier this year due to the recent epidemic.
However, the new cases reported at the end of September and again on October 4 and 5 caused their plans to fall through. Some small and micro businesses have had to close temporarily, or even permanently.
“This was the most painful Golden Week holiday for Macau,” Fong said.
The local government conducted two rounds of mass testing for Covid-19 on September 26 and October 4, with the population-wide results coming out negative.
Lei Choi Chu, a doctor at the public hospital in Macau, said medical workers have been working round the clock during the past days as part of the mass testing, and as part of the frequent testing of residents in areas where the confirmed cases live or had travelled to.
“Each round of testing took over 10 hours,” Lei said. He added that medical staff would have to work for six hours straight, and only took short breaks before starting their next shifts.
Epidemiologists said they had to overcome language barriers in order to conduct the surveys, because several of the confirmed cases were people from foreign countries.
The public has voiced hope that this epidemic can be over soon and that the SAR government will take measures to relieve pressure on businesses and people’s livelihood, so as to assist with economic recovery.
“The most important thing is to make Macau a really safe place for tourists,” Fong said, suggesting that the government should speed up the vaccination of the public.
Official figures showed that, as of Friday, about 385,000 people of the SAR’s total population of around 680,000 have been inoculated with at least one dose of a Covid-19 vaccine. LV/Xinhua