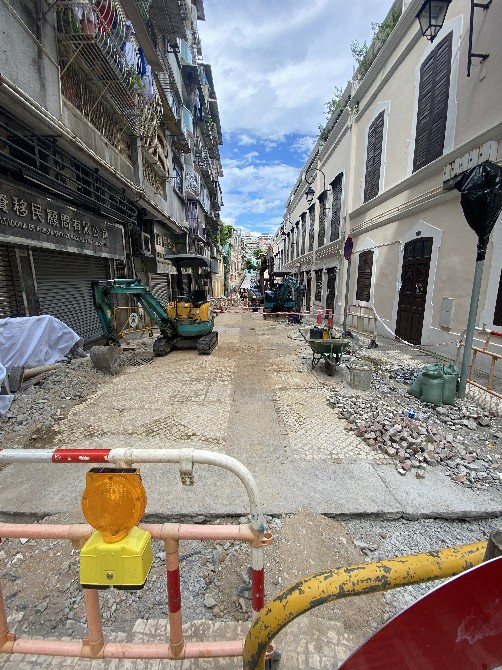 In response to public confusion regarding the eradication of Portuguese cobblestones on two streets in the St Lazarus District, the government defended its decision with safety and historical record as justification.
Officials from the Municipal Affairs Bureau (IAM), which is responsible for the roadwork, and the Cultural Affairs Bureau (IC), responsible for monitoring cultural heritage in the city, discussed the matter on the sidelines of a recent Urban Planning Committee Plenary.
On September 1, the Times sent an inquiry on the matter to the Municipal Affairs Bureau (IAM). No response has been received.
When questioned by the press, Lo Chi Kin, vice president of the IAM’s Administration Committee on Municipal Affairs, emphasized safety as the reason for the work, adding that sufficient communication has been conducted with the IC.
Lo revealed that the two slopes, Rua de Eduardo Marques and Rua de São Miguel, have so far recorded about a dozen accidents involving drivers and pedestrians slipping and falling. Some of those involved, according to Lo, filed for compensation from the government.
He added that the IAM had tried to look for a safer material which would also preserve the harmony between the road and nearby architecture, but none yielded acceptable results.
The IAM and the IC then came to a consensus that the road will be paved with reinforced concrete. Lo stressed that both bureaus are mindful of conservation and aesthetics.
In the same interview, Deland Leong Wai Man, vice-president of the IC, explained the bureau’s main concern is whether the cobblestone is “the most original element historically.”
She said that the materials and patterns used on the two slopes were only decided upon later by the municipal body. Thus the eradication of the most recent design had not led to “our sacrificing certain historical authenticity.”
Leong stressed that safety was not the primary factors taken into account. Instead, it began with the cultural preservation perspective. “This is an aesthetic issue,” she said. “Perhaps some consider reinforced concrete a relatively ordinary material, but our concern still falls within preservation.”
In an earlier interview with Chinese newspaper Exmoo, urban planner Lam Iek Chit attributed the debate to the lack of urban design guidelines. He explained that such guidelines could help the government make designs that harmonized architecture and façades with nearby roads and lampposts.