Gov’t has no solutions for repatriation and hiring of TNRs 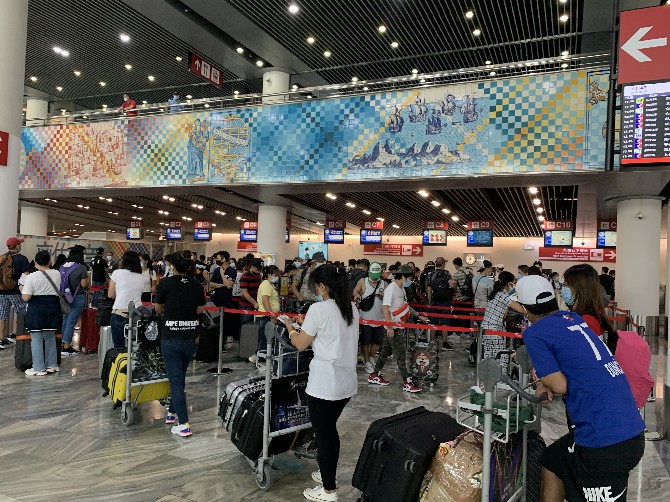 The government has no other solutions for the resolution of the problems related to the number of former non-resident workers (TNR) currently stranded in Macau due to Covid-19.
This acknowledgment was made by the lawmakers at the Legislative Assembly (AL), where the Secretary for Economy and Finance, Lei Wai Nong, yesterday replied to inquiries on several topics.
The topic raised by lawmakers Chan Hong and Wong Kit Cheng was namely the continuation of problems related to the stranded TNRs and the difficulties in hiring of new TNRs, particularly for domestic work.
Lei could not provide any new solution from the government side other than the ones previously known, which involve the repatriation of the stranded workers to their countries.
“The government has been providing help in finding repatriation flights for these workers, so they can return to their countries,” Lei said, adding that the city’s Civil Aviation Authority has been working on this matter.
For the hiring of new workers, mostly for domestic work, the Secretary said that families must resort to hiring workers from the mainland.
Such responses did not please the lawmakers who grilled the Secretary and other government officials present at the AL.
The lawmakers wanted to hear the position of the government on the possibility of either amending the recently approved law for hiring non-resident workers or the establishment of extraordinary measures that could circumvent it to solve the problems.
Helping give replies from the government side, the representative from the Public Security Police Force (PSP) said, “At the time when the law [for the hiring of TNRs] was approved, it did not consider any provision that allowed any exceptions,” a fact that led the official to conclude, “We have no grounds to support extraordinary measures.” He noted that the PSP is adopting an exception system that allows the stranded former workers as well as tourists to renew their visas to stay in Macau until a solution for their exit from Macau can be found.
According to the same representative from the PSP, “ a total of 41 repatriation flights [organized] helped over 4,000 people stranded in Macau to return to their countries.” He further noted that the majority of the requests came from people from the Philippines, Myanmar, and Vietnam.
According to lawmaker Chan, there are still more than 1,000 people in Macau stranded in a situation that can pose serious risks to themselves as well as to society, as “these people have no income, no means of sustainable livelihoods. They can only dedicate themselves to illegal work or criminal activities to survive.”
Addressing the rules recently enforced by the mainland authorities that could open slightly the door to help on this problem, lawmaker Wong noted that it is impossible for any of the stranded workers to comply with the requirements to obtain a visa for the mainland, since with the cancelation of their “blue cards,” their status as workers, were revoked and so they cannot even be vaccinated against Covid-19 with the Chinese vaccine.
“Not even [if they are] paying [for the vaccines] can they get vaccinated. The government and the health authorities have not even considered this possibility,” Wong said, adding that there is a clear and obvious lack of communication and cooperation between different government departments contributing to the deadlock of the issue.
Sulu Sou, Agnes Lam, Song Pek Kei, Angela Leong, Mak Soi Kun, José Pereira Coutinho, Ip Sio Kai, Ella Lei, Zheng Anting, and Wang Sio Man were some of the lawmakers that joined in on the discussion, all in favor of the need for the government to find a fast and efficient solution to this problem.
Assuming that their vote contributed to the approval of the law that is currently in force, the lawmakers called on the government to state clearly their position about what can be done to change the situation.
On this topic, Sou said, “I never thought that the government would be so stubborn [in not acting on this problem]. I always thought that with some administrative procedure things could be done,” he said.
Sou’s point was complemented by Song, who added, “We are in a dilemma. The AL approved [the law] but now due to its limitations the government cannot do anything. What are we going to do about it? Just wait? This cannot be the only possible solution. Something must be done!” she said, adding that the solution given by the Secretary of hiring mainland domestic workers is unacceptable.
“We know that TNRs from the mainland can’t solve the problem of the local families. The salaries are much higher [than those from South Asian countries]. They need to pay at least 7,000 to 8,000 [patacas] and families can’t support those expenses, especially now,” she said.
Lam also said, “There are no [domestic workers from the mainland] wishing to come to Macau. We have this experience from the employment agencies that have no offer. If it’s needed [we should] revise the law. I hope the government can admit that and express that will. We hope that we can find effective measures that can help the families and I hope the government clearly marks its position.”
Despite the many positions in favor of a solution, Lei could not advance anything regarding the intentions of the government.