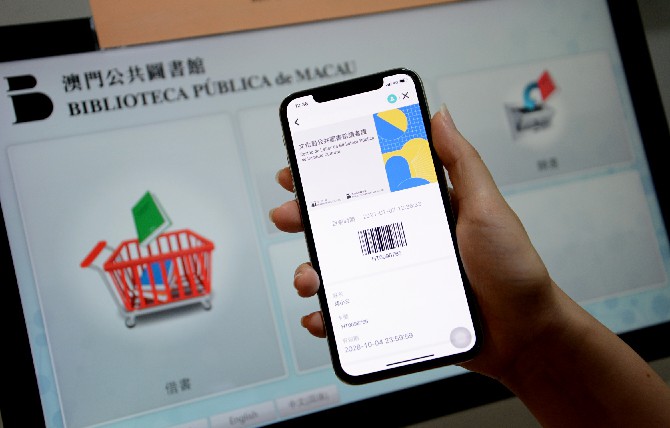 The e-Card Pack, a feature of the government operated Gov.mo app, was launched yesterday with a maximum storage capacity of 28 cards issued by public organizations.
Thirteen government bureaus are included in the scheme, including the Cultural Affairs Bureau (IC), the Sports Bureau (ID), the Municipal Affairs Bureau (IAM), the Labour Affairs Bureau (DSAL) and the Health Bureau (SSM).
Three higher education institutions, namely the University of Macau, the Macau Polytechnic Institute and the Macao Institute for Tourism Studies, have also taken steps to digitize some of their cards, such as Student IDs and Alumni Cards.
The government held a press conference yesterday afternoon to discuss the new feature and to familiarize the press with it. The feature was officially announced at 9 a.m. yesterday.
At the press conference, government spokespersons reminded the press of the convenience of the e-Card Pack. Ng Wai Han, deputy director of the Public Administration and Civil Service Bureau (SAFP), stressed that 500,000 applications for reissuing of the SSM “Gold Card” were received last year. With the e-Card Pack, users need not fear losing and having to reapply for the card.
More importantly, Ng said, although it is rare for a single resident to own all 28 cards, carrying many public service user cards can be uncomfortable for many users. The e-Card Pack can help users lighten the physical card packs in their pockets.
To use the new feature, there is one small step that users are required to take. In the Gov.mo app, users should tap the three lines on the top right-hand corner and then choose eWallet on the drop-down menu.
For a new user of the e-Card Pack, there should be no e-cards yet. Card accounts must be linked to the app before cards can be used electronically. Tap the link on the top right-hand corner to view the page for linking cards.
Users may choose either to link a card on their own by tapping “link card manually,” or automatically by choosing “link with one click.” The former requires the user to select the cards they possess and then link them to the account. The latter will automatically connect cards to the account after matching them digitally.
Swiping the screen from left to right will open the e-Card Pack for quick access at service registration or library check-out, for example.
When using the e-Card Pack, there will be a clock showing the actual time. This is included to allow reception officers at public buildings to quickly verify that the card is displaying in real-time instead of from a previous screen capture.
According to Ng, from the time the app was upgraded early this year until recently, the app recorded a total of 230,000 registered users, which the government described as an “obvious rise.” Currently, the app is providing 90 public service functions.
Understandably, the rise was partly due to the app being made available to Macau residents under age 18 for registration from June this year. However, the registration of minors must be conducted by their parents on their behalf.
With this feature introduced, the e-Card Pack allows parents to have access to their underage children’s e-Card Packs on their own apps. This permission, however, will not deprive underage users’ of the right to their own e-Card Pack.
For example, children seeking healthcare services at government facilities, such as the Health Centers, can be registered by their parents using a linked e-Card Pack.
Although the Green Points Card, issued by the Environmental Protection Bureau (DSPA) to record points for users who put waste in recycle bins, is included in the e-Card Pack, the interface for the card pack is not available in English.
On the other hand, considering some public libraries are popular among English speakers, the lack of an interface in English may prevent them from enjoying the new electronic function. The Taipa Library, for example, has an English publications section.

Interactions between government databases can occur when cards are linked on the new e-Card Pack function of the Gov.mo app, but not the transfer of personal data, Ng Wai Han, deputy director of the Public Administration and Civil Service Bureau (SAFP), said yesterday.
At the press conference held to announce the new function, Ng was questioned by the Times as to whether any transfer of personal data takes place in order to facilitate the automatic card linkage procedure.
Ng stated that the Gov.mo app is a service based on identity verification. She confirmed that the data stored with the Identification Services Bureau (DSI) is not shared with the 13 public entities that are part of the new e-Card feature.
During the linkage process, the DSI data is compared with the data with the 13 participating public bureaus to identify whether the user possesses any de-facto membership cards. If so, the cards will appear in the e-Card Pack.
After all, she said, the Gov.mo app, besides including all the services and functions that it does, is a completely voluntary service. Users have complete discretion to decide whether to use the app or any of its features.
She hinted that tapping the “link” button and triggering the link process implies informed consent.
On the matter of familiarizing businesses with the e-Card Pack so that elderly residents can seamlessly use their e-Elderly Card, Kam Kit Leng, chief of the Senior Service Division of the Social Welfare Bureau (IAS), said that the Elderly Card was digitized in April this year. Businesses were notified back then.
With the introduction of the e-Card Pack, the IAS has once again notified cooperating businesses. Kam assured the public that senior residents would not face incompatibility problems when using their e-Elderly Card.
The Macau Polytechnic Institute announced that it has plans to facilitate the use of e-Student IDs in applying for student bus cards. AL