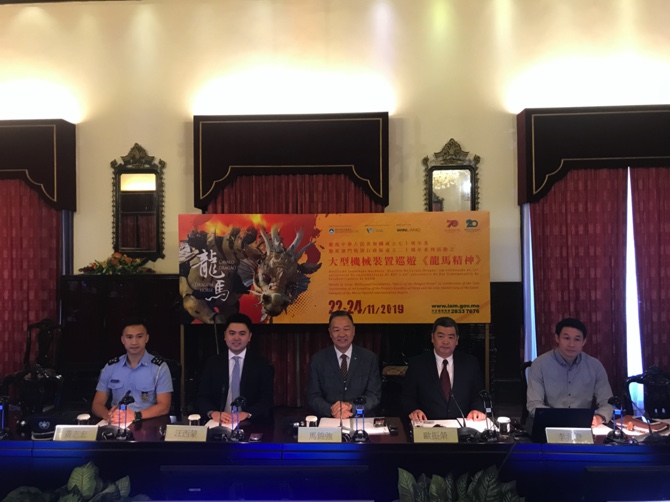 The local government is spending 15 million patacas to bring the French Mechanical Spirit of the Dragon-Horse to Macau for tourists and local residents in celebration of both the 70th anniversary of the establishment of the People’s Republic of China and the 20th anniversary of the Macau handover.

Organized by the Municipal Affairs Bureau (IAM), the Parade of the Spirit of the Dragon-Horse will commence on November 22.

The 12-metre-tall giant mechanical Dragon-Horse will make its debut in Macau and parade with a number of local and overseas performing groups to mark a climax in the year of double celebrations.

The Dragon-Horse was created in 2014, the year of the 50th anniversary of the establishment of diplomatic relations between China and France. It was the Year of the Dragon when diplomatic relations between China and France were established, and the 50th anniversary of such relations was the Year of the Horse. In celebration of this commemorative year, over a hundred Chinese and French professionals spent a year designing and creating the large mechanical installation that combines a dragon head with a horse body. It was named “Spirit of the Dragon-Horse” and has been exhibited in mainland China, Canada, France and other places, attracting universal praise.

The Dragon-Horse is made of special wood and weighs 47 tons. The whole body is yellow, and the heart is a thermoelectric power engine. With a variety of accessories and a complicated structure, it requires 15 people to control it during the performance. Its scale, weight, artistic creation, craftsmanship and technique are currently top in the world. Measuring 18 meters in length, 5 meters in width and 12 meters in height when prancing, it is equipped with a built-in mechanical structure, hydraulic power transmission, and electronic induction control system. With a unique appearance, the Dragon-Horse is capable of running, prancing, bending its legs, moving backwards, blinking, turning its neck and ears, moving its tail, as well as spurting fire and puffing smoke. It is a mechanical giant beast that is as vivid as life.

In addition to the Dragon-Horse, the Vorrarat Suksa Nonthaburi Marching Band of Thailand, the Flagpole waving art group of Hebei, the Macau Lo Leong Sport General Association and the Associação de Danças e Cantares Portuguesa “Macau no Coração” will form a parade team of over 300 people to present various cultural performances. Moreover, there will be large floating balloons of giant pandas, flying dragons, and performers in inflatable costumes to create a grand and fabulous backdrop to the celebratory activities for the 70th anniversary of the founding of the People’s Republic of China and the 20th anniversary of the establishment of the Macao SAR.

The government planned a parade in the Macau peninsula but did not find a suitable route due to the conditions of the roads. The parade route in Taipa is approximately 1,000 meters long.

Children with special needs will be granted priority access to visit the dragon before it is open to the public.

During the parade, the government will make special arrangements for transportation to facilitate ease of access by public transport, with the aim of reducing traffic congestion and minimizing any environmental impact. JZ