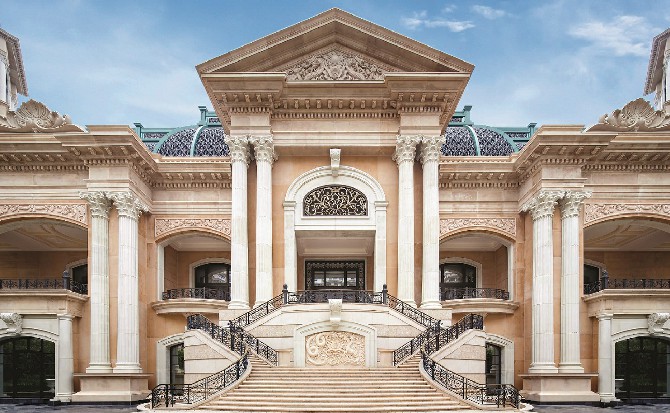 The Grand Lisboa Palace will hold a partial opening tomorrow, July 30: a month later than the expectations of its operator SJM Resorts, whose revised predictions indicated that it would open in the first half of the year.
The announcement was made by chairman and executive director Daisy Ho, who expressed confidence that the grand opening will go ahead despite the latest outbreak of Covid-19 in mainland China that has caused the SAR government to impose quarantine measures on arrivals from some cities – particularly Nanjing.
For Ho, the second phase opening will depend on the pandemic and travel restrictions with hopes that the full opening will take place by the end of this year.
One tower of the Grand Lisboa Palace hotel will open tomorrow, including 300 rooms, while the other 350 rooms will open by the end of the year, if conditions permit.
“We will slowly increase the number of rooms according to actual demand. That’s the plan,” said Ho on the sidelines of a tour for its Art Macao exhibition “Harmony of East and West – The Exhibition by Famous Local Artists” at Grand Lisboa yesterday.
The Grand Lisboa Palace includes approximately 1,900 hotel rooms and suites in three hotels: the Grand Lisboa Palace, the Palazzo Versace and the Karl Lagerfeld.
The executive also revealed that the property has received a permit to operate 150 gaming tables from the government.
Previously, the group’s vice-chairman and chief executive, Ambrose So, raised the possibility that SJM may run a self-promoted casino at its newest property, Lisboeta Macau.
Ho did not elaborate on the idea but only said that the group is now focused on the opening of its new Cotai resort. However, “nothing is impossible.”
Speaking on its dining offers, the chairman said that the establishments are in the final stages of licensing by the Macao Government Tourism Office (MGTO).
The Grand Lisboa Palace is set to feature dining options such as The Grand Buffet, a buffet restaurant; Mesa, a contemporary Portuguese restaurant featuring a bold design with oriental inspiration; Chalou, a classic tea house designed by celebrated Hong Kong designer Alan Chan; Wulao, the popular Taiwanese hotpot restaurant, in addition to casual dining options namely GLP Café, Eight Treasures and GLP Lobby Lounge.
Other dining options will be progressively launched over the coming 12 months, including Italian fine-dining brought by a Michelin-starred restaurant from Italy, Japanese Kappo cuisine presented by a Michelin-starred chef, a haute Cantonese restaurant designed by Alan Chan and a microbrewery featuring authentic Bavarian beer.
The HKD39 billion resort, which marks the group’s first venture on the Cotai Strip, was originally scheduled to open in the first quarter of this year but was pushed back to the second quarter.
Brokerage Morgan Stanley has estimated that the opening of the awaited resort will be further delayed to the third quarter of this year.