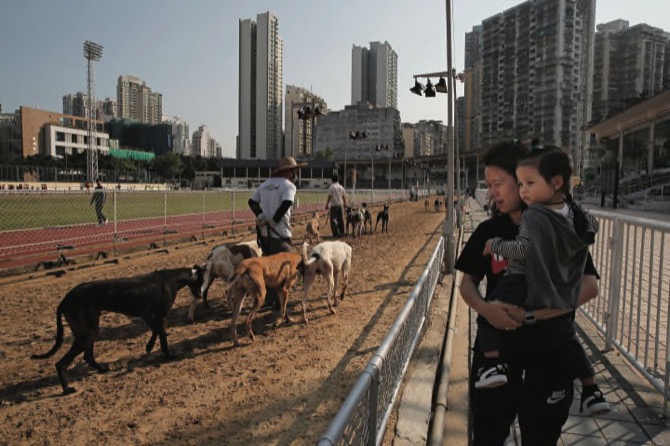 The Macau Canidrome in its final days

Nine months after China’s last greyhound stadium closed its doors, animal rights campaigners are turning their attention to what they describe as the “horrific cruelty” practiced on at least 25 illegal racetracks on the mainland, as well as by their dog breeder affiliates.

The Macau (Yat Yuen) Canidrome closed its doors on July 20 last year, admitting defeat after a multi-year campaign by local and international animal rights activists to shame the management company’s treatment of greyhounds. It had operated in Macau for more than half a century.

But international observers now point to another threat that lies in store for retired greyhounds.

A Sunday Mirror investigation has shed light on the dark underworld that retiree greyhounds face when injury or old age gets the better of them. Many of the greyhounds were bred and raced in Britain and Ireland.

Interviewing animal rights activists and British-Irish greyhound breeders and racers, the Sunday Mirror found that the former racing champions were being sold to puppy-breeding centers in mainland China, where they have their sperm extracted daily until they are no longer fertile and are sold to the dog meat trade.

According to the British tabloid, “with prices of up to £10,000 per litter, male dogs have sperm repeatedly extracted and even frozen so breeders can cash in on the dogs’ success years after they die.”

At least 40 former racing dogs from the U.K. and Ireland are currently caged in China and used to support a suspected 25 illegal greyhound racetracks currently in operation.

One animal rights activist, who was not identified by the newspaper, said that greyhound owners who sell their dogs to Chinese buyers were not aware of the reality.

“People think of retired greyhounds living out a slow, comfy life on the sofa but for these unlucky ones, the reality is far more brutal,” the activist said, as cited by the Sunday Mirror.

“These beautiful creatures are being treated as a commodity. […] After running around a track for years on end they are sent to a country where animal welfare laws are lax. They are completely sucked dry.”

Conditions inside the Chinese facilities are bleak, according to Kerry Lawrence of the Birmingham Greyhound Protection, which helps to co-ordinate rescues of ex-racing dogs.

Male greyhounds are made to produce sperm to be used for artificial insemination or to be frozen for use after the animal dies. In other instances, the dogs can be held in position for hours as their handlers try to coerce them to mate.

“The methods aren’t necessarily cruel or inhumane, but the relentless approach, shocking lack of care and grim circumstances surrounding the process are,” Kerry said.

According to the Sunday Mirror, some greyhound trainers in the two European countries are becoming more wary of Chinese buyers after videos of animal abuse had surfaced online. The newspaper reported that one Irish dog trainer had stopped selling greyhounds to a buyer based in Hong Kong after seeing a video of a racing dog thrown into boiling water.

While there is no ban on exporting the greyhounds to China, Britain’s regulatory body said it is cracking down on the export practice for animal welfare reasons. In Ireland, the Irish Greyhound Board is working with the government on legislation to protect the animals and is rolling out a digital database to track the racing dogs after they leave the country. DB