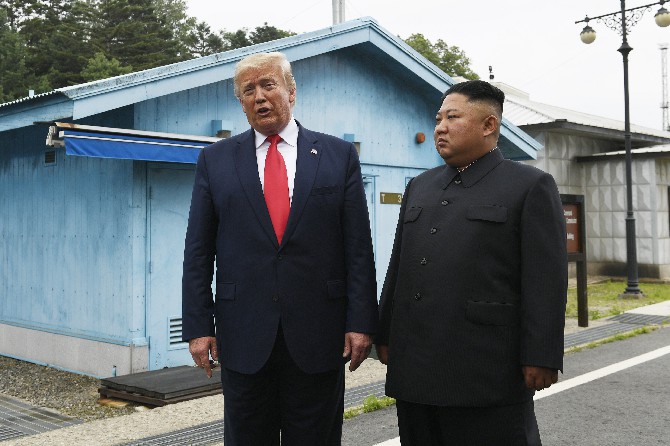 Where’s the war? That’s how President Donald Trump defends his North Korea policy at campaign rallies even though he’s joined the list of U.S. presidents unable to stop the ever-growing nuclear threat from Kim Jong Un. That threat will transcend the November election, no matter who wins.
Despite Trump’s three meetings with Kim, the North Korean leader is expanding his arsenal. This month, Kim rolled out a shiny new, larger intercontinental ballistic missile during a nighttime parade in Pyongayng.
Arms experts said the missile could possibly fire multiple nuclear warheads at the United States. It serves as a reminder that despite Trump’s boasts, North Korea remains one of the biggest dangers to U.S. national security.
North Korea hasn’t been a major campaign issue, though it could surface in Thursday’s debate, which is supposed to include a national security segment. Democrat Joe Biden has blasted Trump’s chummy relationship with Kim, saying that, if elected, he would not meet the North Korean leader unless diplomats first draft a comprehensive agreement. Trump, meanwhile, predicts he can get a deal quickly if reelected, citing the dire conditions in North Korea.
Talk of a quick deal is probably just talk because there’s no sign of significant contacts between Washington and Pyongyang, says Bruce Klingner, a research fellow at the Heritage Foundation and former CIA Korea deputy chief. He and other North Korea watchers say they are bracing for Kim to showcase his military might again after the U.S. election.
“North Korea already has an ICBM that can range all over the United States, down to Florida and beyond, so the only reason to have an even larger missile is to be able to carry a larger payload,” Klingner said. He said it’s likely that North Korea will “do something strongly provocative early next year, regardless of who is elected president.”
North Korea is continuing to produce nuclear material, according to a Congressional Research Service report. In addition, between May 2019 and late March 2020, North Korea conducted multiple short-range ballistic missile tests in violation of United Nations Security Council prohibitions.
Multiple diplomatic initiatives during both Democratic and Republican administrations have failed to get North Korea to give up its nuclear weapons in exchange for sanctions relief. Trump dared to be different, opting for in-person meetings with Kim in Singapore, Hanoi and the Demilitarized Zone.
But despite the summits and exchanges of what Trump called “love” letters, his administration has been unable to get traction on denuclearizing North Korea. The last known working group meeting was last October.
Even so, Trump is still claiming victory, saying he’s kept the U.S. out of war with North Korea.
“Where’s the war?” he asked supporters last week in Greenville, North Carolina. He’s used the same line in other campaign speeches in battleground states.
“We have a good relationship with Kim Jong Un,” he said in Freeland, Michigan. “Who knows what likely happens? All I know is we’re not in war and that’s OK.”
Biden says that if he’s elected, he will inherit a North Korean challenge that is worse than when Trump took office.
“After three made-for-TV summits, we still don’t have a single concrete commitment from North Korea,” Biden said in a statement on North Korea. “Not one missile or nuclear weapon has been destroyed. Not one inspector is on the ground. If anything, the situation has gotten worse.”
He added: “North Korea has more capability today than when Trump began his ‘love affair’ with Kim Jong Un, a murderous tyrant who, thanks to Trump, is no longer an isolated pariah on the world stage.” Biden has pledged to work with allies to press Kim to denuclearize.
Biden’s advisers say the former vice president is not averse to sitting down with Kim, but not before a comprehensive negotiating strategy is outlined at working-level meetings by diplomats on both sides. The Biden campaign also criticizes Trump for scaling back military exercises with South Korea.
North Korea typically fires off missiles or conducts tests in a show of force before key U.S. and South Korean elections. This time, experts predict, Kim will engage in saber-rattling after he knows who wins.
“Kim would like to deal with President Trump, rather than Biden,” said Sue Mi Terry, a former intelligence analyst specializing in East Asia who is now at the Center for Strategic and International Studies. She said Kim does not want to make trouble for Trump by conducting a major provocation before the election. “In January,” she said. “That’s the time we need to watch out for it.”
If Biden wins, the North Koreans will want to engage with the new administration from a position of strength, according to Victor Cha, who negotiated with North Korea during the George W. Bush administration. If Trump wins, Cha thinks the president might want to move quickly to begin negotiations because he went “all in” on his man-to-man diplomacy with Kim and doesn’t want to accept personal defeat. DEB RIECHMANN, WASHINGTON, AP