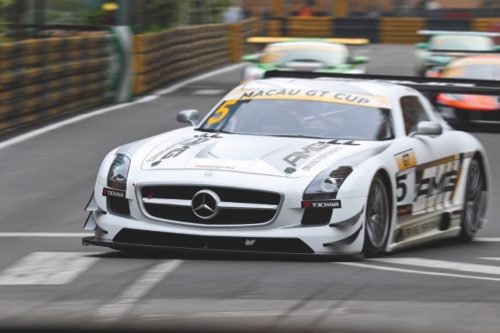 Maro Engel clinched a resounding victory in the Macau GT Cup yesterday, dominating the 12-lap race on the legendary Guia street circuit and breaking Edoardo Mortara’s three-win run. Cementing the dream result for the Mercedes-
AMG Driving Academy team, Engel’s teammate Renger Van Der Zande crossed the line in second place, 1.223 seconds behind the German.
Mortara ensured a podium finish for the Audi Race Experience team in third place, with his teammate, Laurens Vanthoor, fourth across the line in his Audi R8 LMS Ultra. Former FIA World Touring Car Championship driver Augusto Farfus of Brazil was fifth in a BMW Z4 GT3, ahead of Portugal’s Rui Aguas in the Ferrari 458 Italia GT3.
With this win, Engel has overcome the disappointment of a year ago, when a puncture on the penultimate lap cost him victory: “It’s amazing. It’s everything I dreamed of last year. The start worked out perfectly. We had a lot of torque, and that propelled me into Turn 1. We put in a lot of effort, and the 1-2 with Renger makes it really special.” 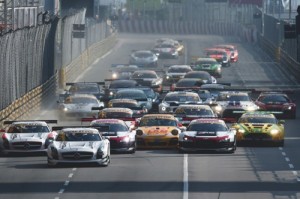 For Van Der Zande, there was no disappointment in crossing the line behind his teammate: “I didn’t think we could go for a 1-2 after yesterday. Our pace wasn’t all that good all weekend, and the Audis have been quicker. In Macau it’s all about staying out of the wall – and we stayed out of the wall! Well done to Maro, and compliments too to Audi, who have been fast all weekend. In Macau, it’s all about staying out of the wall, and we did that so I’m very happy.”
Mortara was crestfallen at missing out on a seventh win in Macau: “I was focused on the lights, and got on the gas when they went out. We lost first position then. They [Mercedes] were faster and then we had [tyre] degradation. Normally we’re much quicker than them in the mountain, but they were pulling away in the first and second sectors.”
At the rolling start, pole-sitter Mortara and Vanthoor were set on closing the door on Earl Bamber in the LKM Racing Porsche GT3 R. However, while the pair ensured Bamber had no opportunity to grab the lead, they were taken by surprise by the pair of Mercedes, which shot by and into the lead.
Displaying superior top line speed and acceleration, the two Mercedes powered ahead while Mortara, Vanthoor and Bamber gave chase. Two laps from the flag, Farfus shot past Bamber and into fourth place. However, on the final lap, Bamber and Takeshi Tsuchiya, in another Mercedes-Benz SLS AMG GT3, ran wide two abreast at Lisboa Bend, the pair stopping just short of the barriers. That dropped them both down the order, with Bamber crossing the line in 8th, behind Marco Wittmann in a BMW Z4 GT3, and Tsuchiya down in 14th.
With the best entry in the Macau GT Cup’s seven-
year history, all 31 cars finished the 12-lap race, in a testament to the quality of the field. Mercedes’ dominance of the race has thrown the gauntlet to the other manufacturers, and a potential rematch in 12 months is a mouthwatering prospect.