Guangzhou finding a sense of humor at ‘Watermelon’ club 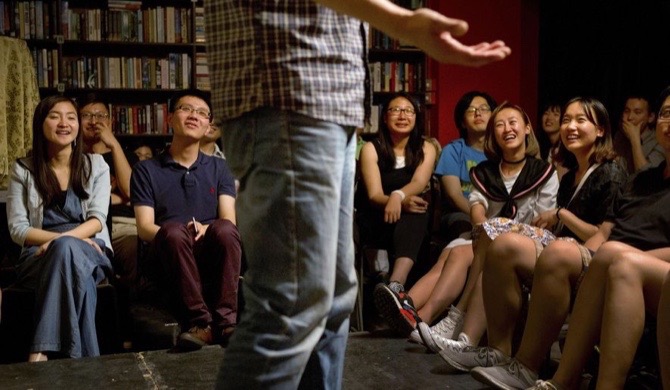 If you think what the performers say is funny, laugh out loud; but if it sucks, just heckle them with your applause,” said a comedian surnamed Ji, warming up the audience at the beginning of a stand-up comedy show in Guangzhou.

With Ji barely finishing these words, the whole arena burst into applause, playing along with the joke.

A comedy show is held every Saturday night at a small theater called “Xigua,” or “Watermelon,” located in Yongqing Fang, a century-old alleyway in the southern Chinese city of Guangzhou. Three or four stand-up comedians take to the stage one after another and entertain audiences during a 1.5-hour show. This would have been unthinkable a few years ago.

In the metropolis, which has few theaters for stand-up, there are no more than 20 shows a month – in both Mandarin and Cantonese – with the ticket prices generally less than 100 yuan (114 patacas) per show.

“When we first started out, there was one time when we had only two people in the audience, but 10 comedians backstage,” Ji told the audience during the show’s break. The ticket sales at the time were rarely enough to support even a single performer.

Now, as China warms to the idea of the stand-up comedy format, that is beginning to change.

The stand-up comedy format, which originated in Europe and North America, is quite young in China, with “open mic” shows first appearing in pubs in Beijing and Shanghai in 2009. Audiences in Guangdong came to it much earlier as it was first introduced to neighboring Hong Kong in the early 1990s.

Stand-up generally caters to young people, most of whom are between the ages of 20 and 35.

Dong Jiama, born in 1990 and deeply influenced by Cantonese stand-up comedy, discovered that anybody could perform stand-up when he read about a show at a Guangdong club in 2014. He began to perform onstage himself and eventually started a stand-
up club called “Banana” with his friends in 2015.

Though few people – mostly Guangzhou locals – turned up to their first shows, the industry began to garner more attention after a number of TV shows related to stand-up became popular in China in 2017.

Since then, their audience have steadily grown and now each of their formal performances can attract about 50 audience members on average.

To accommodate the growth, the club has moved its performances from coffee shops, pubs and bookstores to a small theater – a more stable and formal venue for the art form.

With more and more Chinese people spending money on live entertainment amid booming development of the culture industry, Dong and his friends are looking for bigger performance venues. To them, a bigger audience is a measure of their success.

As one of the Banana club’s founders, Fang Yu used to work for a well-known technology company in Shenzhen. His work experience, workplace relationships and overtime work are all fodder for his jokes.

Stand-up material based on reality has become hugely popular among young people in China. “All of our jokes come from our own lives and resonate with the audience. Only when you come to the club and participate in the interactions, can you feel its true charm,” said Liang Xiwei, a comedian at the club.

Many stand-up comics like to prepare new material for each performance, and they see it as a minimum requirement for the mastery of their art. Though busy with formal performances now, members of the Banana club still hone their craft with their peers, and continue to hold “open mic” events to try out new material before a live show.

Stand-up comedy attaches great importance to originality, but the protection of original material is not easy. The comedians must strike a difficult balance between promoting their shows via the internet and risking having their jokes plagiarized.

According to Dong, there remains considerable room for improvement in the country’s stand-up industry. “To attract bigger audiences, we should localize our stand-up, which came from the West in its content, forms and even rhythms,” he said. DB/Xinhua