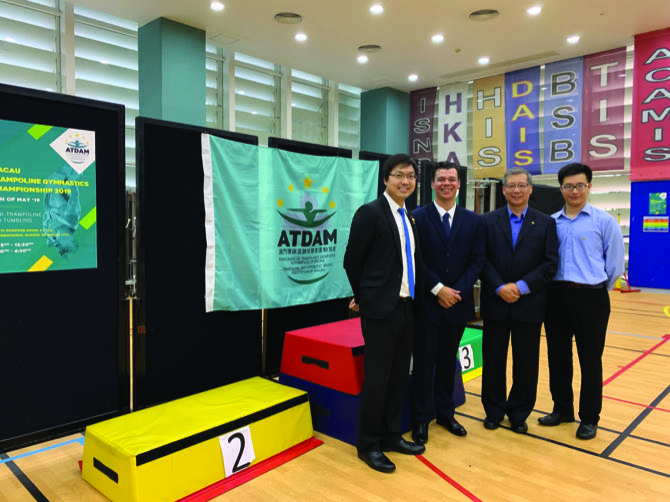 Head judge Fernando Sena Santos (second from left), and the other three judges

The annual event of the Trampoline Gymnastics Competition, organized by the Trampoline and Acrobatic Sports Association of Macau (ATDAM), with the support of The International School of Macao, was held last Saturday. The event saw the participation of a total of 70 gymnasts representing three clubs or schools: the Gymnastics Club Macau (GCB), the Macau Portuguese School (EPM) and the Macau Anglican College. The ATDAM is the only local entity promoting the sport of Trampoline Gymnastics,

As on previous occasions, the competition was split into two sections, morning and afternoon, with the first session dedicated to the Tumbling competition and the second to the Mini-trampoline competition.

The GCB was the club or school that stood out, achieving gold at all levels (both Individually and Teams) at the Tumbling and Mini-trampoline, in both female and male sections. The only exception to the supremacy of the GCB was imposed by the EPM on the 9-10-year-old Tumbling competition where the school won both individual and team competitions. 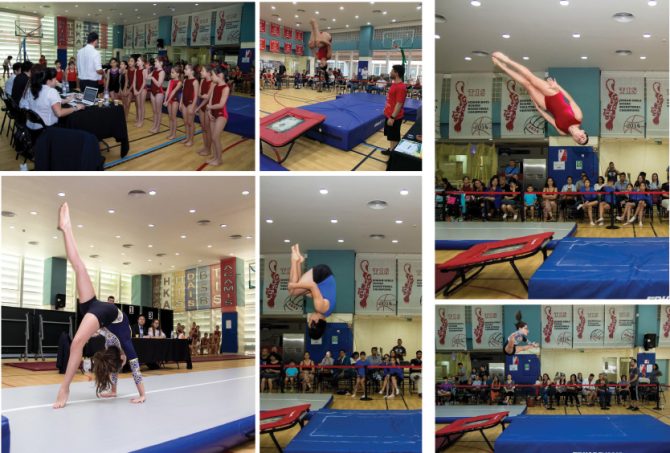 Despite the supremacy displayed by the GCB, the ATDAM representative told the Times that the competition was very well contested, which shows that the technical level of trampoline gymnastics in Macau continues to evolve in a very positive way.

As on previous occasions, the competitions were evaluated by a panel of four judges from the Gymnastics Association of Hong Kong, headed by International Judge Fernando Sena Santos, who is the local association president.

In previous years, the competition also counted the participation of several clubs or schools from the neighboring region of Hong Kong, something that was not possible this year.

The president of ATDAM told the Times, “The agenda is always a very complex matter to manage. To find a weekend where everyone could join is [virtually] impossible.” He further noted, “In Hong Kong there will be a competition this weekend and coming to Macau would complicate the preparation of the gymnasts for that important competition as, [in Hong Kong] they mostly practice different categories within the sport.” RM