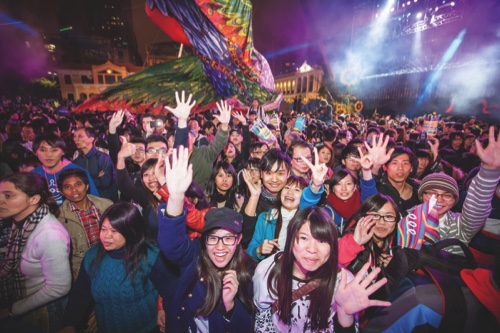 Spending hours in Macau’s chaotic traffic contributes greatly to influence residents’ feeling of satisfaction, the Happiness Index Survey 2014 shows.
The index was set at 6.99 percent out of 10, meaning that Macau citizens are slightly happier than last year (6.98 percent), but traffic, inflation and housing continue to play a role in their general dissatisfaction.
As a joint study conducted by the Macau Economic Association and the Macau Polytechnic Institute’s Gaming Teaching and Research Center, the index is based on the responses given by 1,000 adult residents interviewed on Macau’s streets. The research was presented yesterday by members of both institutions.
Lao Chi Ngai, chairman of the Macao Economic Association, said that Macau’s happiness index is above average when compared to other indexes, such as the one conducted by the Organization for Economic Co-operation and Development (OECD).
Mr Ngai reiterated that there isn’t necessarily a correlation between economic development and residents’ happiness. Although Macau residents are quire satisfied with the economic growth and macro-economic sub-indexes, it is difficult to find a direct correlation between fast economic growth and the level of people’s satisfaction with their lives.
“Sometimes when the economy is growing faster and faster, local residents feel more pressure on their daily lives. We have more traffic jams, inflation, and young people cannot event dream of buying a house, so they feel hopeless,” he recalled.
Mr Ngai stressed that both social and economic issues play a role in people’s general satisfaction, therefore GDP growth should “walk hand-in-hand” with improving citizen’s quality of life.
“I conclude that the GDP and the happiness index are both very important in social-economic development. We cannot simply focus on GDP growth and exclude happiness, because if we focus only on the GDP growth we may even be sacrificing residents’ happiness,” he said.
According to Mr Ngai, every government should address both while striving to develop the country, as without people’s happiness and well-being economic development is meaningless.
In his presentation, Mr Ngai revealed that happiness has been severely affected by the hours one spends in traffic jams. Respondents rated their satisfaction of transportation 4.37 in a scale of 0 to 10 (against 4.98 last year).
He recalled that if in previous years a resident would spend half an hour in the traffic to get home, it can now spend between 45 minutes to one hour. He urged Macau government to step up its efforts to solve public transportation issues, while improving the whole infrastructure network.
With the prices of goods going up each year, inflation is another issue that concerns most of the residents. They’ve rated the cost of living 4.66, and the living environment 5.42, where housing is included.
Mr Ngai recalled that the government has not been very diligent in providing enough public housing units to residents. Therefore, he urged Macau’s administration to improve efficiency in public housing application procedures.
Furthermore, he said that reclamation is another important measure the government should address. Authorities should also further cooperation with neighboring Zhuhai city regarding border crossing, he added.
The research found that younger people’s level of satisfaction is lower than elderly or middle age people. Researchers said that generally middle age and elderly people are settled and have already acquired a house, which contributes to their happiness, whereas younger people are still looking to settle.
In addition, citizens with a high education background do not necessarily feel happier than others, “because they have higher expectations in life,” said Mr Ngai.
The study shows that women feel happier than man, which Mr Ngai said it might happen because “men hold more responsibilities.”
A similar study was conducted in Hong Kong and its main findings were yesterday presented by professor Ho Lok-sang, director of the Center for Public Policy Studies at Lingnan University, in Hong Kong. He revealed that although Hong Kong’s society was severely divided due to the Occupy Movement, the results were similar to last year’s. He found that younger people in Macau feel more confident about their future than the Hong Kong youth.