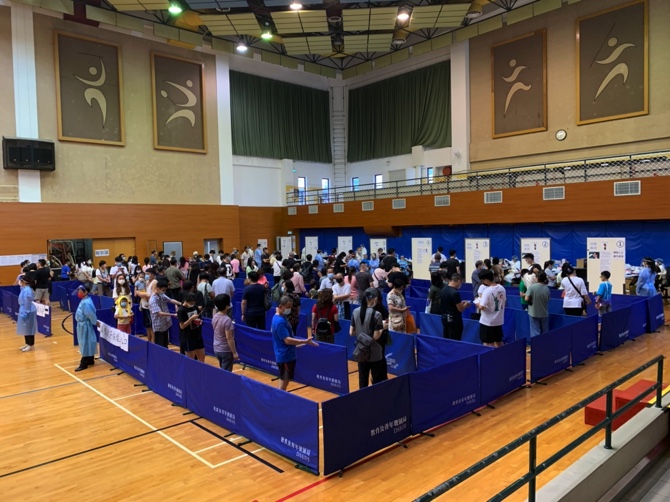 Since this round of recorded SARS-CoV-2 infections started this past Saturday, the government has been urging local residents to refrain from gathering and to stay home. Residents are also encouraged to minimize movement within the city.

However, members of the public have expressed their concerns on various platforms and media about the mass gatherings at citywide NAT stations. Controversy has grown since Sunday this week, the opening day of the previous round of mass testing.

Pulmonologist Alvis Lo, director of Health Bureau (SSM), admitted to the fact, while adding that NATs are best at detecting infections due to their high sensitivity in detecting the nucleic acid of the virus.

The health chief highlighted that the SARS-CoV-2 rapid antigen test (RAT), that was made mandatory for everybody in Macau yesterday, acted as a complementary tool alongside the mass or common NAT. It is more accessible and practicable for the general public.

People were asked to upload their RAT results to a government self-declaration platform along with a picture of the RAT kit.

Lo also said that bureau workers would be able see the pictures of the RAT results uploaded by test takers. “Please don’t think that we will not check the uploaded pictures; we did and will do so,” the health chief revealed.

He added that this is the reason why the bureau managed to correct erroneous declarations made by test-takers who had misinterpreted results.

At the same time, all patients whose RATs have returned as positive result will be taken to the public hospital by ambulance for confirmatory NATs, after which their results are posted to the self-declaration platform.

The platform was overloaded yesterday morning when residents rushed to take the RATs and upload their results.

Moreover, he explained that different countries had different testing strategies. Some relied mostly on NATs while some took a NAT and RAT hybrid strategy. He insisted that the government’s current tactic is the most appropriate for Macau.

One journalist was concerned about the excessive amount of personal data requested by the SSM on the self-declaration platform. Lo explained that it was collected to facilitate contact tracing if a positive case is detected.

However, the fields on the platform that ask test takers for the names of their workplaces or schools have been withdrawn.

In addition, the platform requires test-takers to agree to certain terms and conditions, which include but are not limited to surrendering their personal data. The clause in the terms emphasized that “the provision of all personal information […] is voluntary.” Without accepting the terms, the platform will not take any declaration. For the time being, it is unclear whether not declaring the results will lead to any consequences, such as not being allowed to enter certain venues.

The health chief pledged that “we will not have time to conduct extra processing of the data.”

Meanwhile, the health chief hinted that identifying 11 preliminary positive cases from a total of 370,000 RAT results uploaded in half a day was worrying. He started off by saying that the RATs had detected 11 such cases which had to be confirmed, but in proceeding he referred to the cases as if they had been confirmed.

Defending the need for the RATs, the health chief suggested that if the 11 people had not taken the test, the virus might have been transmitted to other family members. The growth, he hinted, might have been exponential.

Therefore, Lo insisted, people who have not taken a RAT as of 5 p.m. yesterday should still self-test.