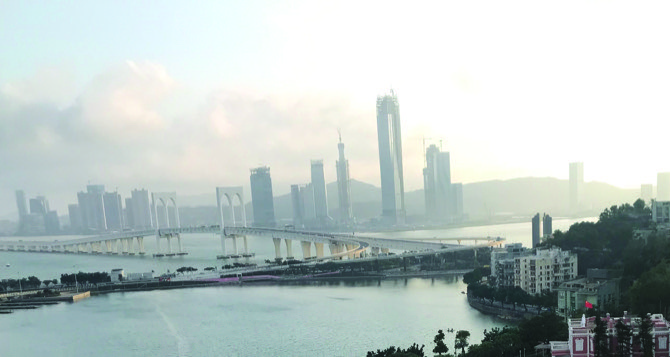 Zhuhai is likely to continue carrying out 24-hour construction in order to prepare several projects in time for the 20th anniversary of the Macau handover. According to the mainland’s plan, the first phase of the majority of Hengqin’s construction projects should be finished by 2020, including seven commercial center projects.

One of the biggest projects, which has been planned to start operation in 2019, likely before the 20th anniversary of the handover, is the Hengqin port.

Occupying 1.31 million square meters, the port is expected to become the biggest border checkpoint between the mainland and Macau, and as such, it has been designed to cater for a maximum of 80 million crossings annually.

In October 2018, a report by Macao Daily News said that more than 1,200 construction workers and over 150 heavy machines had been working day and night in order to make the port ready for operation before the 20th anniversary of the Macau handover.

According to mainland’s plan, the first phase of many of Hengqin’s construction projects should be finished by 2020.

For a long period, “China Speed” in construction has been admired by the world and by the country itself. Given the recent ambition to turn Hengqin into another Shenzhen, “Zhuhai Speed” may also be worth an endorsement from both its people and Macau people.

However, as Hengqin spends all its efforts on celebrating the 20th anniversary of Macau, building itself into the new high-technology center, the new Chinese medicine zone, the new birthplace of entrepreneurship, and the new transportation hub for the Greater Bay Area, some of its citizens and some Macau residents are suffering from the side effects of the ‘Hengqin Speed’.

Noise pollution is right at the top of the list.

“The road project between Hua Fa Shou Fu and Yue Fu Jian has been carried out for nearly two years, and, since 2018, the construction is basically conducted day and night. It severely disturbs the people. It is now 1:46 a.m., there have been many nights like today, when I can’t fall asleep,” the complainer wrote. “Which department issued the approval? Why do they not care about the residents?”

As of September 2017, there was a total of 117 municipal and housing projects in progress in Hengqin, according to official statistics.

Another complaint submitted by a Zhuhai resident in April 2018 criticized the continuous construction operations in Hengqin:

“We have been tolerating it for two weeks; we can’t tolerate anymore. We request the relevant party to stop the construction [at night] and return to the people a quiet rest time.”

Zhuhai’s environmental protection bureau replied to the second complaint, saying that the night constructions were not approved by the bureau, and the bureau had already requested the relevant companies to make changes.

However, the level of noise pollution created by some of those projects is still being noticed by residents in both Hengqin and Macau because of the non-stop operations across the Av. dos Jogos da Ásia Oriental.

Last week, the Times contacted the Macau Environmental Protection Bureau (DSPA) and the Office of the Secretary for Transport and Public Works to ask whether the bureau had received any complaint from Macau residents regarding these non-stop constructions, and if the bureau had communicated with Zhuhai’s relevant authorities over concerns that the 24-hour construction operations in Hengqin might cause noise pollution.

As of press time, no reply has been provided to the Times.

Currently, one of the biggest projects under construction in Hengqin is the new port.

The Macau government previously announced the relocation of Macau’s Cotai frontier to Hengqin.

The China MCC20 Group Corp. Ltd Hengqin Port Building, which is the landmark of Hengqin Port and is just on the other side of the river to Av. dos Jogos da Ásia Oriental, is currently under construction 24 hours per day in the hope that the project will be completed according to its schedule.

But its construction has been reported as a nuisance for residents of both Macau and Hengqin, who are forced to tolerate incessant noises at any time of the day or night. JZ