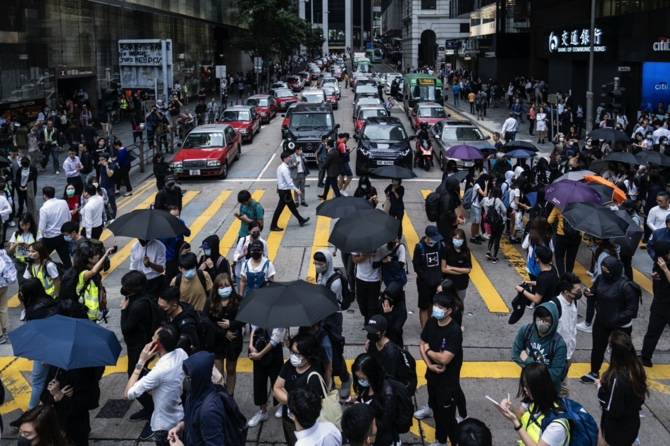 Chinese state media responded to the escalating street violence in Hong Kong with harshly-worded commentaries, condemning some politicians and teachers for emboldening the demonstrators as social media users called protesters “cockroaches” and “thugs.”

The coverage is in line with Beijing’s approach of framing the months-long protests as being led by a small group of extremists who are holding Hong Kong’s economy hostage against the wishes of the majority of residents. There was no mention of a protester, now in critical condition, whose shooting by a police officer Monday helped reignite simmering tensions in the city this week.

The Global Times hinted in commentary that the central government could employ “direct intervention” under the Basic Law it uses to govern Hong Kong. “The rioters’ rampage is a short drive from the nearest outpost of the Shenzhen Armed Police Force and a short walk from the People’s Liberation Army in Hong Kong,” it said.

The question of whether China will send troops into Hong Kong has hung over the protests since they began in June. In August, Hong Kong and Macau Affairs Office spokesman Yang Guang refused to rule out a military intervention, saying Beijing would never allow unrest to “go beyond the control” of the local government and endanger national unity and security.

“The state has always been willing to control the situation in the special zone under the existing governance structure. If the mob arrogantly escalates the challenge, leading to more serious and widespread disorder and humanitarian disaster, direct state action will be inevitable,” the Global Times said.

Hu Xijin, the paper’s editor-in-chief, earlier compared the protesters who have gotten into altercations with the police and set a man on fire to “ISIS-like terrorists.”

Xinhua and People’s Daily blamed politicians and teachers for supporting the protesters, while calling Hong Kong citizens to stand up against the violence.

“The politicians who are opposing China and disrupting Hong Kong glorify the violent crime as fighting for democracy and freedom, so as to turn Hong Kong into an independent or half-independent political entity,” Xinhua said in a commentary. “Hong Kong is at its most critical juncture,” it said, adding that “if this anomaly is allowed to continue to ferment, there will be little time for society to correct itself.”

In an editorial titled “Don’t Let The Campus Become a Shrine to Violence,” People’s Daily called on students to “keep their eyes open and remain rational,” lest they become “political fuel” for the opposition and fall victim to a plot by rebels to seize power in Hong Kong.

Protesters waged an ongoing battle with police Tuesday that turned the campus of the Chinese University of Hong Kong into a smoking battlefield.

A video clip of pro-democracy activist Joey Siu being interviewed by Germany’s Deutsche Welle also went viral on Weibo, with the the platform showing related posts had been viewed more than 100 million times. A CCTV post about the interview was liked almost 200,000 times. Tens of thousands of Chinese internet users criticized her for failing to logically justify the use of violence by protesters.

On the mandarin-dominant social media platform Weibo, violent protesters were widely described as cockroaches in Cantonese, the Chinese dialect used in the Hong Kong. Users also commented angrily under a video clip showing the bloodied face of a Hong Kong resident. “Thugs have completely over taken the streets of Hong Kong,” one user said. Bloomberg