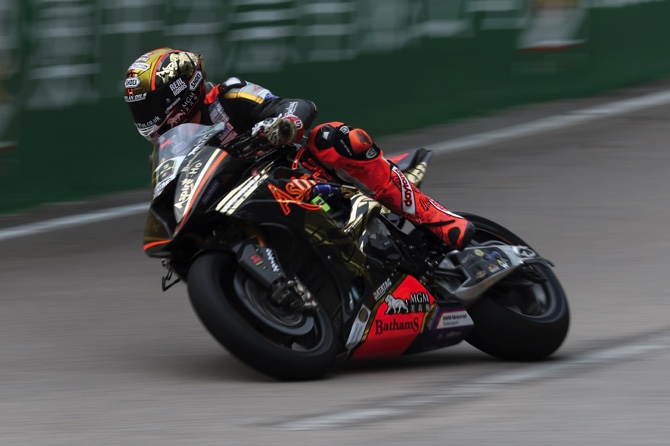 The 53rd Macau Motorcycle Grand Prix has yet to begin but there have been some important names dropping out of the competition at the last-minute.

First, British rider Danny Webb, who finished fourth place last year, announced his withdrawal from the race after parting ways with his team. A day later, all-time favorite Martin Jessop, third place finisher last year and six times podium finisher in the Guia Race, said that he would not return to the Macau race.

Although some important names will not be participating, the field still looks strong with the return of 2013 winner Ian Hutchinson who is making his comeback after being away from the race for a few years due to several severe injuries.

The 16-time Isle of Man TT winner returns aboard a BMW from Team Milwaukee with SMT, and as always, would be a name to consider among the front-runners.

Returning to the track and expected to take the lead are three-time race winner Peter Hickman and eight-time winner Michael Rutter.

After a fantastic year with so many achievements, Hickman aims to equal Stuart Easton’s score of four wins in Macau, moving into the Legends Hall of Fame together with names such as Rutter and Ron Haslam.

Aiming to expand his incomparable record, the eight-time winner will bring the very special two-wheel machine Honda RC213V to Macau for the second consecutive year.

As last year, Hickman will be riding a Smiths-prepared BMW, which has brought him victories at both the Isle of Man TT and North West 200 this year, as well as placing him sixth overall in the British Superbike Championship.

Another top contender looking for a chance to get to the front to reach a podium is Horst Saiger, who will be returning to Macau for the 12th time in a Yamaha R1.

With the same aim in mind, another veteran of Macau, Gary Johnson, racing consistently at the top, will be making his attempt in Macau on a BMW HP4 Carbon machine, hoping to be even faster than last year, when he was fifth overall.

Eyes are also on another Johnson, this time David. The Australian will be filling the seat left by Jessop on the PBM Ducati and pairing with the experience of his teammate John McGuiness aiming to reach further ahead than the seventh position last year.

Returning after last year’s scary debut will also be the Spaniard Raul Torras, fully recovered; Torras hopes to bring his Kawasaki ZX10-RR for a lot more laps this year, hoping to keep the flames going from the exhaust pipe.

With all these participants, the Motorcycle GP has the hallmarks of being a very interesting race and will remain as a program highlight for many more good years.