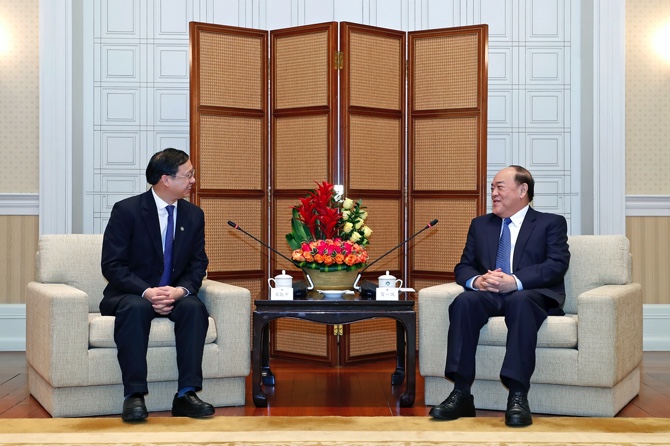 Chief Executive Ho Iat Seng met with a delegation from Jinan University on Monday to discuss matters relating to the development of higher education and the training of talented people in Macau.

Ho endorsed the university’s reputation and importance in mainland China, remarking that the school has trained many talented people who love Macau and the country.

Ho noted that in 2018, the leader of the Chinese Communist Party, Xi Jinping, visited Jinan University and endorsed the university’s characteristics and strengths, also setting out a direction for its future development.

Macau’s Chief Executive hopes Jinan University alumni will continue to play an important role in the future development of Macau.

Jinan University is a public research university based in Tianhe District, Guangzhou, and is one of the oldest such institutions in the country.

During the meeting, both parties agreed that as the Greater Bay Area continues to develop, Jinan University and Macau’s universities will certainly come closer to cooperate.

Currently, Jinan University has 40,000 full-time students, of which 27,800 are undergraduates and 12,200 are graduate students. 13,700 students come from outside of mainland China, many of whom originate from Taiwan, Macau, and Hong Kong.

The school plans to further expand the enrolment scale of Hong Kong, Macau, Taiwan and international students. It will also aim to increase the proportion of non-mainland students from the current 33% to 40%.

The university’s rector, Song Xianzhong, reported that the university currently has approximately 2,200 Macau students, and over 20,000 Macau residents have graduated from the school.

Song said that Macau students and Macau graduates are “excellent” and are making “important contributions” to the development of Macau.

In 2016, Jinan University drew in the attention of the Macau public when the Macau Foundation announced it was donating 100 million yuan to Jinan University to coincide with the institution’s 110th anniversary. The local government explained that the Macau SAR maintains strong links with mainland and wants to give back to the motherland through contributions to its educational development.

The local government said that such donations are an obligation of Macau, as Jinan University has educated a large number of people in the SAR.