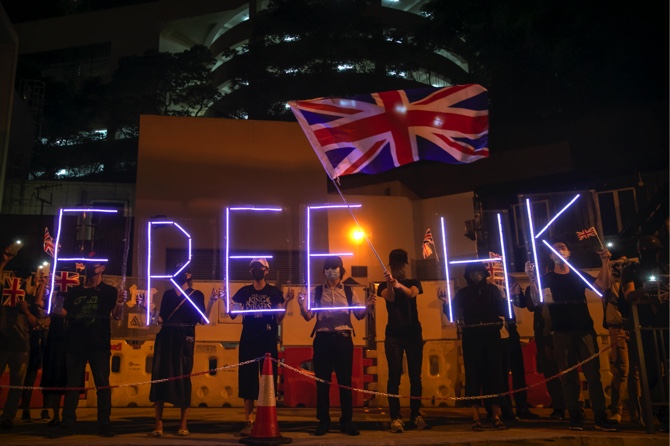 Hong Kong pro-democracy protesters were rallying last night in support of separatists in Spain’s Catalonia region, as a Chinese official accused them of colluding with overseas movements.

Organizers billed last night’s event as a show of solidarity for the Catalan movement, which was sparked by fury over lengthy prison sentences for leaders of the region’s separatist movement.

Hong Kong protesters have taken to the streets since June in increasingly violent and chaotic protests amid increasing fears about Beijing’s tightening grip on the semi-autonomous Chinese city.

Their demands include elections for the city’s top leader and an inquiry into alleged police brutality, but not independence from China. Organizers were careful to skirt the issue, with online posters advertising the event with a slogan “United, we stand for freedom,” but did not make any mention of secession.

Violent protests erupted in wealthy Catalonia this month after a court sentenced separatist leaders to up to 13 years in prison for an effort to declare the region’s independence in 2017.

There have been parallels been the two movements, with the Catalan protesters adopting fluid Hong Kong tactics inspired by martial arts legend Bruce Lee’s “Be water” philosophy. Both movements have occupied airports to disrupt flights and Catalonia flags have been seen at Hong Kong rallies.

Ahead of the event, a senior Chinese official denounced Hong Kong’s protesters, accusing them of colluding with movements overseas.

“A virus has been running rampant in Hong Kong, which is even more deadly than SARS. Its name is street violence,” said Xie Feng, commissioner of China’s Ministry of Foreign Affairs office in Hong Kong, referring to a 2003 disease outbreak that killed about 300 people.

“The true motive of the opposition in Hong Kong and the foreign forces behind them is just to mess up the city, overthrow the legitimate government, seize the jurisdiction, and ultimately destroy ‘One country, two systems,’ by turning Hong Kong into an independent or semi-independent political entity,” Xie said at a forum, adding it’s “wishful thinking.”

China took control of Hong Kong from Britain in 1997 under the “One country, two systems” formula, under which communist rulers in Beijing promised to let the city maintain its own legal and financial system and civil liberties unseen on the mainland. But Hong Kong residents fears Beijing is reneging on those promises.

A Chinese Foreign Ministry spokeswoman in Beijing blasted U.S. House of Representatives Speaker Nancy Pelosi after she tweeted in support of the Hong Kong protesters.

“My full support and admiration goes to those who have taken to the streets week after week in non-violent protest to fight for democracy and the rule of law in #HongKong,” Pelosi tweeted along with a picture of her with Hong Kong pro-democracy figures Jimmy Lai and Martin Lee.