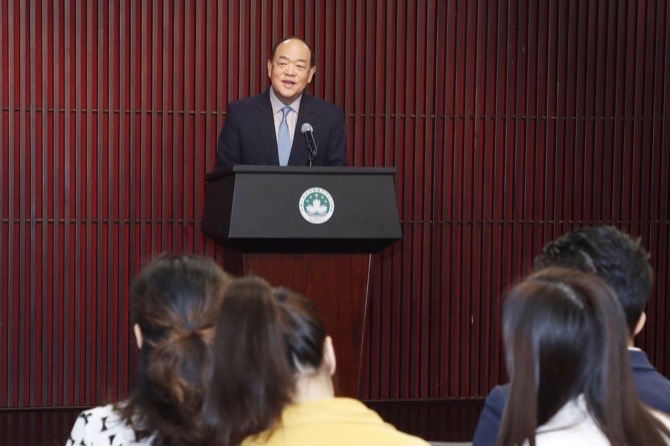 Chief Executive-elect Ho Iat Seng pledged last week that he would address the gaming sector’s 3+3 system, adding that the future amendment bill in the gaming law would clearly stipulate the maximum number of gaming concessions.

The official was speaking during a press conference in Beijing last week before flying back to the MSAR after being officially confirmed as Chief Executive- elect (CE).

The current gaming concession and sub-concession model remains an issue because it relies on a loophole in the law.

“This appears to be the first time a CE or a CE-designate has admitted that the 3+3 concessions [model] is a legal issue,” said Ben Lee, managing partner of Gamix Management & Consulting.

“The current gaming concession system is a model of three plus three. But actually, the gaming law only stipulates [a maximum of] three gaming concessions, which means that [the existence] of the three others is a historical issue,” Ho said.

He then assured the press that the lead-up to the expiration of the three gaming concessions and three sub-concessions would be conducted in a smooth manner.

Meanwhile, lawyer and political commentator Sérgio de Almeida Correia, who advocates an end to the sub-concessions regime, noted that the gaming law should be changed in order to allow the number of concessions required for the healthy development of the gaming industry in Macau.

The move would also reinforce internal and external competitiveness.

This concession tool sets strict rules according to Law 16/2001, of which Article 7 clearly states that there is a maximum of only three allowable concessions.

“It makes no difference to me to say right from the law that there are six or eight concessions to be granted, or that they can be up to eight or more, leaving the government the possibility of deciding the opening of the international public tender and how many it will award,” explained Correia.

“What cannot happen is for the law to say that the concessions will be three and then there to be six or a dozen in practice. This is a total discredit of the system,” he added.

Meanwhile, commenting on Ho’s statement that the government would clearly stipulate the maximum number of gaming concessions, Correia warned that the move might be a hindrance to the government.

According to Correia, this move has already been tried before and it was a mistake, as it resulted in the government deciding to grant sub-concessions that were not foreseen in the law.

“The laws should not be changed every time government policies change,” argued the lawyer. “The legal system must be stable.”

Meanwhile, the Chief Executive-elect also highlighted that he would start preparing for the policies and measures mentioned in his election campaign platform. Some may also recall an earlier promise to continue the policies of his predecessor and the implementation of the “one country, two systems” principle.

However, Correia pointed out that Ho is still unsure regarding his “immediate platform” that he intends to put in place.

“He needs to elaborate more over this issue and to explain in words so that everybody understands what he really wants to do. He has to abandon the ‘round speech’ as it is of no use and only appreciated by those who have no ideas or nothing to say,” said Correia.

Speaking on possibly implementing universal suffrage for legislative elections in the future, Ho pointed to the SAR’s Basic Law, noting that it rules out the possibility of this.

However, Ho would not rule out the possibility of having universal suffrage to elect the Chief Executive, though no timetable currently exists for that, he stressed.

“Mr. Ho is Mr. Status Quo. That’s why he was chosen by Beijing. In fact, it is the only reason to choose him,” commented Correia.

Ho is set to become the Macau’s third Chief Executive on December 20.