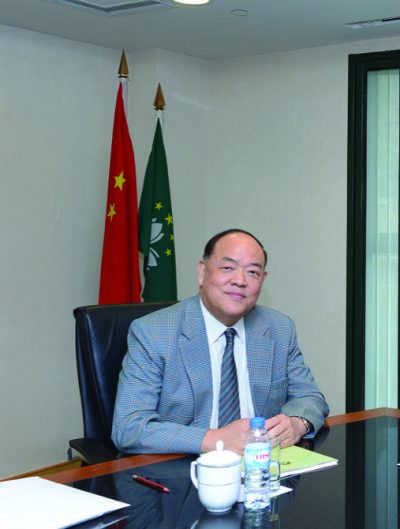 Legislative Assembly President Ho Iat Seng yesterday confirmed he is putting himself forward as the first declared candidate in the race to become Macau’s next Chief Executive, but first he says he needs authorization from Beijing.

Long expected by the public, Ho made the formal announcement yesterday after the government’s policy address at the Legislative Assembly.

The veteran legislator said that as he currently holds a seat on the National People’s Congress, he is technically ineligible to run for Macau’s top post. Hence, he has submitted his resignation and if that is approved he “will likely run.”

Though, he is yet to formulate a platform for his campaign, Ho indicated that his two primary objectives would be to improve people’s livelihoods and promote the integration of Macau into the Greater Bay Area.

Ho Iat Seng has long been touted as a likely replacement for Chui.

Steve Vickers, CEO of specialist political and corporate risk consultancy Steve Vickers and Associates, told the Times earlier this month that “there is a sense that this election will break from a long-term reliance on the ‘three families’ […] that it would be the Ma family’s turn, after Ho and Chui.”

However, a recent endorsement from Chui Sai Cheong, the Chief Executive’s brother and current Legislative Assembly vice president, “suggests to me that it is in the bag for Ho,” said Vickers.

Ho said that one factor leading to his decision to become a candidate in the fifth Chief Executive election was his friends. According to Ho’s account, his friends wanted him to use his experience from his time at the Legislatively Assembly and the National People’s Congress to run Macau.

Emphasizing this experience, the Legislative Assembly president brushed aside comments yesterday about his lack of administrative experience within the executive branch of government.

These comments were likely made with incumbent Secretary for Economy and Finance Lionel Leong in mind. Leong dropped an overt suggestion in February that he would contest the upcoming Chief Executive election.

According to Vickers’ assessment, Leong “has done a sound job implementing Chui and Beijing’s wishes” and “his administrative experience would be an advantage.” Nevertheless, Vickers regards Leong as “less likely to win” than Ho.

Other possible candidates according to Vickers include one of the Ma family clan and Secretary for Security Wong Sio Chak, though even Secretary for Social Affairs and Culture Alexis Tam’s name has been dropped by others.

Wong has ruled out running for the role making him a less likely contender, but Alexis Tam has not provided a definitive answer as to whether he is considering a shot at the top post.

Chief Executive Chui Sai On will formally step down in December 2019. His replacement will be decided in August, when an electorate of 400 will convene to select Chui’s successor. It is not unusual for Chief Executive candidates in Macau to run unopposed.