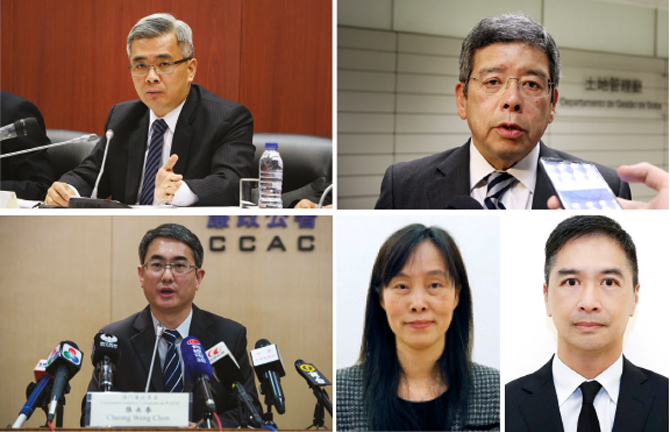 The new Chief Executive (CE) Ho Iat Seng is preparing to change three out of the five secretaries from the previous government.

In the new government, Wong Sio Chak and Raimundo do Rosário will retain their respective offices at Security and at Transport and Public Works, the Chinese news outlet All About Macau reported yesterday from sources inside the government.

According to the report, the Commissioner Against Corruption (CCAC), André Cheong, will replace Sónia Chan as the next Secretary for Administration and Justice.

The Commissioner of Audit (CA), Ho Veng On, is thought to be the most probable successor for Lionel Leong in the Secretariat of Economy and Finance.

Probably the most unexpected of all the changes announced was the promotion of Ao Ieong U, the current director of the Identification Services Bureau, to the post of Secretary for Social Affairs and Culture.

These changes will also prompt further developments, as seats will be vacant at CA, CCAC, and other departments.

In CCAC, the choice seems to have fallen on the internal promotion of the Commissioner’s deputy Hoi Lai Fong to the main post, while Lei Wai Nong, Vice President of the Municipal Affairs Bureau should take office at the CA.

According to All About Macau, there will be a total of 10 changes in higher official posts in the Ho Iat Seng government.

These changes also include several Bureau heads, such as the Unitary Police Service, where Commander Ma Io Kun will retire and be replaced by the Commander of the Public Security Police Force, Leong Man Cheong.

Another Bureau to have the head change is the Customs Service, where current Vice Director Wong Man Chong will replace Alex Vong.

More changes are expected in the Justice sector where the Public Prosecutor-General Ip Song San will replace the current President of the Court of Final Appeal, Sam Hou Fai, who will also retire. Deputy Prosecutor Chan Tsz King will move up into the post of Ip.

With less than two months left until the next CE is sworn in, an official announcement is expected this week. RM