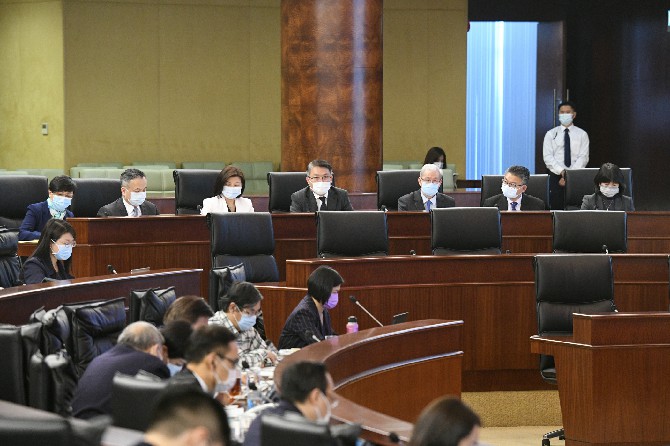 Lawmakers are not happy with the approach taken by the government regarding the ongoing economic crisis resulting from the Covid-19 pandemic. Their disappointment was clear yesterday at the Legislative Assembly (AL) plenary session, where Secretary for Economy and Finance Lei Wai Nong was grilled by lawmakers questioning the lack of government measures to mitigate the difficulties of both citizens and companies.
Lei was at the AL to respond to a series of inquiries from lawmakers on different topics. They were all directly related to social difficulties in dealing with the Covid-19 economic crisis, which has already gone on for over a year with no foreseeable end in sight.
The Secretary was only able to respond to the many questions and suggestions by saying that the government is actively following up on most of the issues mentioned and enforcing measures according to what was established in the Policy Address for 2021. This did not go down well with most of the lawmakers, who insisted that the Secretary and the government need to take a more proactive attitude and enforce a series of measures to stabilize the economy, and secure the employment of residents and the survival of many local companies, especially those that are directly related to the tourism and gaming sectors, as soon as possible.

Third round of economic stimulus unlikely to ‘mobilize financial reserves’
Contrary to what the director of the Economic Bureau, Tai Kin Ip, said earlier this month when responding to an inquiry by lawmaker Leong Sun Iok, the Secretary for Economy and Finance said that the government’s financial reserves, “will only be utilized in [case of] a very special situation.” Lei made the statement yesterday in reply to lawmaker Sulu Sou’s calls for the urgent rolling out of the third round of economic stimulus measures.
Lei noted that use of the reserves was only authorized in exceptional cases, adding, “in the next few years [we already know] that we will not be having a surplus in the reserve. Since we need to face all these vital expenses, we need to do a [precise] evaluation to see when [the financial reserve] can be used.”
The reply came after several lawmakers, including Leong Sun Iok, José Pereira Coutinho, Ella Lei, Ip Sio Kai, Zheng Anting and Song Pek Kei, asked the Secretary to present the concrete measures included on the package and a timeline for the release of the third round of stimulus which is aimed at providing economic relief for residents.
In reply to the questions, Lei said that the current focus of the government is solving the problems arising from the decline in visitors to Macau by firstly guaranteeing that the region continues to be a safe place for locals and tourists, and secondly, promoting Macau’s safety amongst mainlanders to attract them to resume traveling to Macau, revitalizing the local economy as a consequence.
For Lei, a factor that will influence these measures is how the pandemic is lasting an unexpectedly long length of time. This will influence the length of time that will take to achieve economic recovery.
“The [economic] recovery will take longer [than expected] as some sectors also suffered a structural change. We have hope as we are soon going to have the vaccines to be able to control the pandemic,” Lei concluded.

Mechanism to replace TNRs withlocals discussed again
Another topic that was raised by several lawmakers was the enforcement of the so-called “mechanism of exit of non-resident workers (TNRs),” to allow unemployed or underemployed local residents to take over their jobs.
The topic was first raised by lawmaker Leong Sun Iok, to which the Secretary for Economy and Finance said, “The government will follow up closely on the evolution of the number of these workers as well on an analysis regarding the job posts that have a larger demand from local workers to develop a plan for the exit of the TNRs, fostering access to the jobs for locals.”
According to Lei, until December 2020 the number of TNRs in Macau was around 176,000, a figure that constituted a decrease of 18,000 when compared with the same period in the previous year. The Secretary added that the reduction in the number of these workers was more significant in the hotel industry, which registered a decrease of 8,903 workers last year.
To facilitate access to the jobs, the government will “continue to reinforce the professional training of locals and help those that wish to change their career path by providing the needed support for this [change],” Lei remarked.
Lawmakers Song and Zheng urged the government to pay special attention to the workers and companies operating in the “Gaming Promotion sector,” which is also the commonly known as the junket sector.
Song said that the number of workers dismissed from this sector could even constitute a danger to society.
During his turn, Zheng highlighted the contribution over the years of the junket sector to “healthy financial reserves and Macau’s prosperity,” adding that now is the time for the government to compensate them for their “great contribution.” He urged the government to take measures to “transmit confidence to the sector.”
According to Lei, there are around 85 licenses in Macau for the exploration of VIP gaming involving over 1,000 gaming tables. Aside from the effects of the pandemic, these are also suffering from “market changes related to offering and demand,” Lei said, noting that there are topics that “are not convenient for the government to address at this time.”
Previously, lawmaker Song had urged the government to act fast on the matter and to “not let the situation fall to the lowest possible point, from which will be very complicated to recover from.”
Secretary Lei tried to add some positivity to the discussion by suggesting that the new unemployment rate, which was officially announced today, has contracted from 4.1% at the end of the third quarter to 3.8% in the last quarter of 2020. This figure is not ideal, according to Lei, but does provide a positive outlook.

The number of bankruptcy filings last year reached almost 5,000, a 20% increase, Secretary for Economy and Finance Lei Wai Nong said yesterday at the Legislative Assembly in reply to a query from lawmaker José Pereira Coutinho.
Attempting to diminish the importance of the figure, Lei added that on the other hand there was around 1% of growth in the creation of new companies in Macau.
Pereira Coutinho also wanted to know how many workers had been affected by long-term unpaid leave. The director of the Labour Affairs Bureau, Wong Chi Hong, responded to this by noting that the bureau does not have figures on this as “it is not of mandatory communication.”