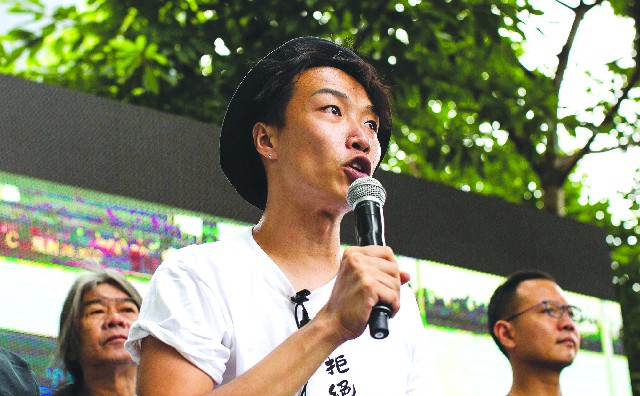 One of Hong Kong’s most prominent protesters was recovering after being attacked on the street by men wielding hammers.
Jimmy Sham – convenor of the Civil Human Rights Front, which has organized many of the city’s largest peaceful protests – issued a plea from his hospital bed yesterday for police to allow a Sunday march to go ahead in the Tsim Tsa Tsui area as planned. Sham was assaulted by four to five men Wednesday while on his way to a meeting in nearby Mong Kok – the second time he’s been attacked since August.
“When Jimmy was at his street counter, many of the citizens expressed that they really hope there will be a safe march on Sunday,” the Civil Human Rights Front said in a statement Thursday. “Jimmy therefore urges the Police to issue Letter of No Objection, so that Hongkongers can express their views.”
The Civil Human Rights Front has helped organize several of the largest protests ever held in the former British colony, including two largely peaceful marches in June that drew more than a million people. The demonstrations have since mushroomed into a broader push for greater democracy, leading to regular clashes between protesters and police and occasional incidents of mob violence.
The coming weekend will be the Asian financial center’s 20th-straight weekend of unrest.
Ng Tak-nam, chief police inspector for the Mong Kok area, condemned the attack on Sham, which he said appeared to have been premeditated. “The police will investigate impartially and seriously, regardless of the person’s background and identity,” Ng told reporters.
Sham, who is planning to join the district council elections next month, was attacked in August by two masked men with a baseball bat and knife. Police have arrested three men in connection with that earlier case, charging two of them with conspiracy to assault causing bodily harm. The third is on bail pending further investigation.
The Civil Human Rights Front said that the assailants in the latest attack appeared to be aiming for Sham’s head, elbows and knees. The group said he suffered several wounds, but had no broken bones.
“The Civil Human Rights Front strongly condemns the acts of the perpetrators,” the group said. “It is not hard to link this incident to a spreading political terror in order to threaten and inhibit the legitimate exercise of natural and legal rights.” Shelly Banjo, Bloomberg