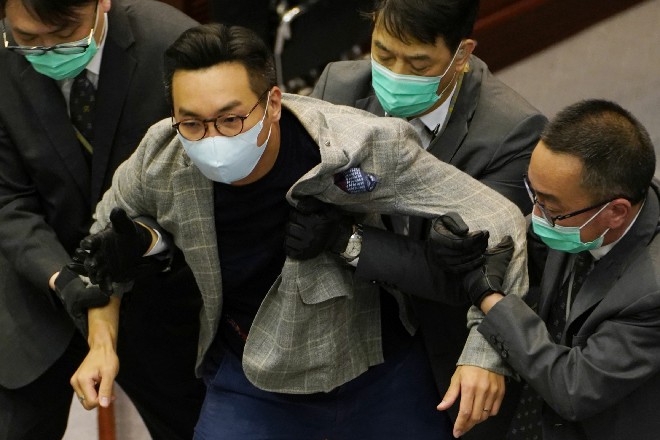 Hong Kong’s decision to query opposition candidates about ties with foreign governments suggests authorities could be preparing to use new national security legislation to disqualify pro-democracy advocates ahead of a key fall election.
At least seven potential pro-democracy candidates for Hong Kong’s Legislative Council elections have received questionnaires from the government asking them to show they haven’t violated the city’s mini constitution, known as the Basic Law, or the recently imposed security measures.
The move fueled concerns within the pro-democracy movement that Hong Kong officials might use provisions of the security law – which bars subversion, secession, terrorism and foreign collusion – to question, undermine or disqualify opposition candidates who have previously criticized the local administration and the government in Beijing.
The election, set for early September, comes after unprecedented anti-government protests last year. It follows local District Council elections in November in which the opposition won 85% of the seats, momentum it hopes to ride to a majority in the legislature.
If Hong Kong were to use the controversial national security law to disqualify candidates, it would likely prompt fierce criticism from the U.S., which has already blasted Beijing for imposing the legislation – and moved to end the special trading privileges that help distinguish Hong Kong from the mainland – amid broader tensions with China.
“These letters are paving the way to disqualification, but sometimes there’s still some room to maneuver,” said Ivan Choy, a senior politics lecturer at the Chinese University of Hong Kong. Still, he added, “The overall situation is much worse with the national security law, after the landslide victory of the democrats in the District Council elections, and because of the bad relationship between the U.S. and China.”

Foreign collusion
At least 12 opposition figures have received letters of inquiry from their respective electoral officers, according to the Hong Kong Economic Journal and Cable TV. They include prominent activist Joshua Wong, Alvin Yeung and Cheng Tat-hung of the Civic Party, and Kenneth Leung, who plans to represent the accountancy sector.
Yeung was asked to explain his recent visit to the U.S. – where he met American officials and called for sanctions against certain Hong Kong officials – and if he will continue lobbying foreign governments, according to the letter seen by Bloomberg. It cited Yeung’s social media posts and media interviews.
“Your requests to foreign countries to make legislation to sanction the Hong Kong government is in fact pressuring the government with the help of foreign powers and inviting foreign forces to interfere in Hong Kong’s internal affairs,” the letter to Yeung said. “How would such behavior concur with what you declared in your nomination statement to ‘uphold the Basic Law and to pledge allegiance to the Hong Kong Special Administrative Region’?”
In a written reply, Yeung said he found it “hard to accept the subjective interpretation and assumptions” behind some of the questions, and denied anything he did contravened the Basic Law. He also said the activities referred to in the letter occurred before the promulgation of the national security law on June 30, that he was simply advocating for Hong Kong to abide by its constitutional obligations under the “one country, two systems” principle, and that the letter veered into questions of politics that were beyond the purview of an electoral returning officer.
“If you require further education on the basic principles of democracy and elections, I would be more than happy to assist,” Yeung wrote. “However, I do not understand why these are relevant considerations for you in your capacity as Returning Officer.”
In a statement on Sunday evening, the Hong Kong government said “the validity of a candidate’s nomination is solely determined by the Returning Officer according to the legal requirements and relevant procedures.” A spokeswoman for the Hong Kong government did not immediately respond to a call and an email requesting comment yesterday morning.

Life sentences
In a series of Twitter posts, Wong – the subject of a Netflix documentary – blasted the government for seeking to ban opposition candidates.
“Clearly, under the new #nationalsecuritylaw, political screening covers candidates’ social media accounts, media interviews and election flyers. Even an op-ed piece could be framed as ‘colluding with foreign forces’ and used as excuses for political purges,” he wrote. “When #Beijing is paving ways for a large-scale election ban of pro-democracy runners, the forthcoming #LegCo poll in Sept will not be the election in ordinary sense. It carries grave implications, especially when legislature is the last crumbling pillar of the city’s autonomy.”
Despite the security law coming into effect, with punishments as harsh as life in prison, Hong Kong’s pro-democracy parties this month held a two-day primary that drew more than 600,000 voters in an effort to narrow a surge of candidates ahead of the election.
Hong Kong’s government and China’s top agency in the city said the process could violate the new security measures, and pledged to investigate and possibly prosecute the primary’s organizers.
The unofficial voting process was designed to overcome fractures in the opposition movement between traditional democrats and more radical so-called “localists,” and present an organized slate of candidates that could benefit from the momentum generated by last year’s protests to oust pro-establishment rivals. Bloomberg