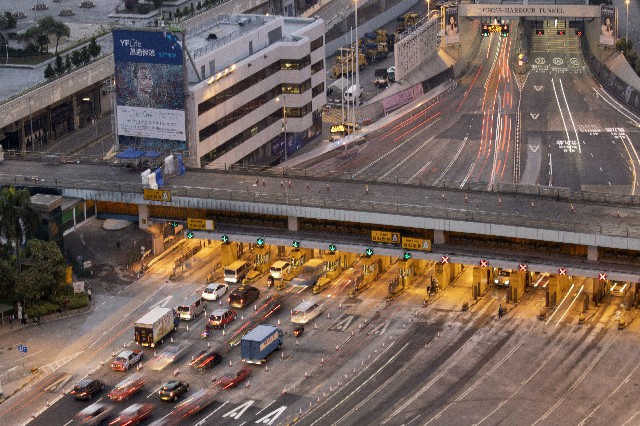 A major tunnel in Hong Kong reopened yesterday as a weeklong police siege of a nearby university appeared to be winding down, closing one of the more violent chapters in the long-running anti-government protests in the Chinese territory.
The Cross-Harbour Tunnel, which links Hong Kong Island to the rest of the city, had been closed for two weeks after protesters blocked the approach with debris and set the toll booths on fire as they clashed with police.
Search teams sweeping the Hong Kong Polytechnic campus for a second straight day found no evidence of any protesters still holding out, said university vice president Miranda Lou. On Tuesday, one person was found — a young woman in weak condition.
Lou told reporters that university officials would let the police decide if they want to enter the campus to investigate but hopes for an end to the siege so a cleanup operation can begin. Police had no immediate comment.
The campus is littered with piles of garbage, and police said there are also stockpiles of dangerous materials, including explosives.
Calls for police to retreat from the campus have escalated after the pro-democracy camp won a stunning victory in local elections Sunday, delivering a stinging rebuke to city leader Carrie Lam’s tough line on the protests, which are in their sixth month.
Lam offered no concessions, saying only that she would accelerate dialogue and identify ways to address societal grievances.
“Carrie Lam is the goddess of democracy. She has single-handedly motivated and galvanized us to fight for democracy,” an activist, who only gave her name as Tham, said mockingly during a Tuesday night rally at the Tsim Sha Tsui district.
Tham, who works in South Korea, said in an online livestream of the rally by the Apple Daily newspaper that she had returned to Hong Kong to cast her ballot.
Echoing what many protesters feel, she said the election outcome cannot be viewed as a victory, as the demonstrators’ demands, including free elections for the city’s leader and legislature and a probe into alleged police misconduct, have not been met.
“This election doesn’t mean anything because we have not achieved our goals,” she said.
A lull in violence that began days before the elections has continued as protesters in the largely leaderless movement weigh their next step amid Lam’s refusal to compromise. Small, peaceful rallies have popped up this week during lunchtime and at night in some areas.
Lam has said the central government in Beijing did not blame her for the election setback, which saw the pro-democracy bloc win control of 17 out of 18 district councils. While it may have reflected unhappiness with the government’s handling of the unrest, she said Tuesday that it also showed that many people want an end to the violence.
Lam said she hopes to resume her community dialogue and will set up an independent review committee to find solutions to deep-seated societal issues.
“Please help us to maintain the relative calm and peace that we have seen in the last week or so and provide a good basis for Hong Kong to move forward,” she said.
Some pro-establishment figures have pointed fingers at Lam for their loss, while the pro-democracy camp has asked her to step down. Some analysts said Lam has lost all credibility with the election loss and Beijing could replace her before partial elections for legislature members next year.
The protests started in June over an extradition bill seen by protesters as an erosion of their freedoms promised when the former British colony returned to Chinese control in 1997. The movement has since expanded into a protest over what they see as Beijing’s growing interference in the city.
Some analysts said that China’s ruling Communist Party isn’t likely to soften its stand on Hong Kong, but that it is treading cautiously amid trade talks with the United States. It also faces pressure from planned U.S. legislation that could derail Hong Kong’s special trade status and sanction Hong Kong and China officials found to violate human rights.
President Donald Trump has been ambiguous over whether he will sign or veto the Hong Kong bill amid warnings of countermeasures from Beijing.
Trump told reporters Tuesday at the White House that his message to Hong Kong protesters is “We are with them.” At the same time, he also cited his “very good relationship” with Chinese President Xi Jinping and said the U.S. was in the final stages of a trade deal.
Regardless, the bill will become law 10 days from the time of its passage last week without Trump’s endorsement. If he vetoes it, Congress can also override it. EILEEN NG & KEN MORITSUGU, AP 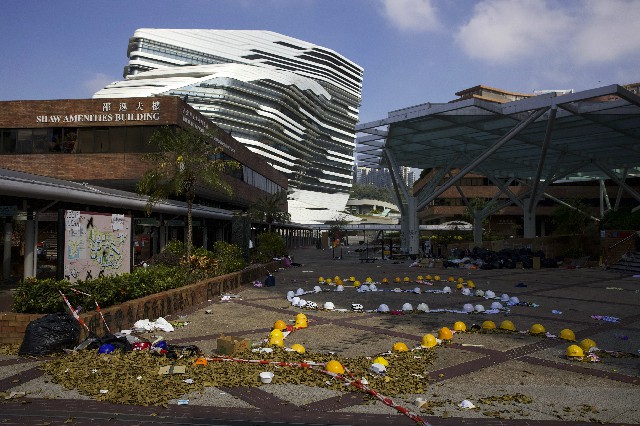 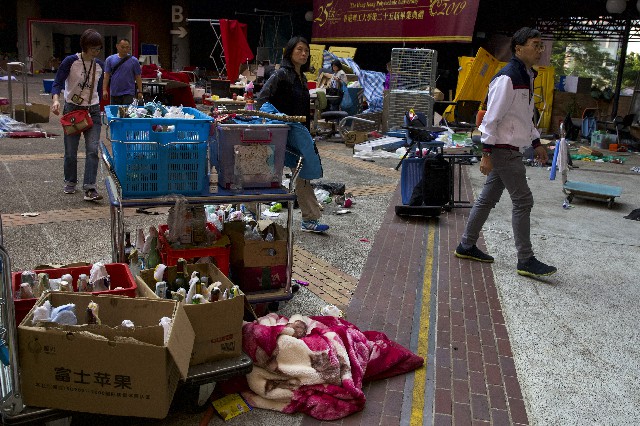