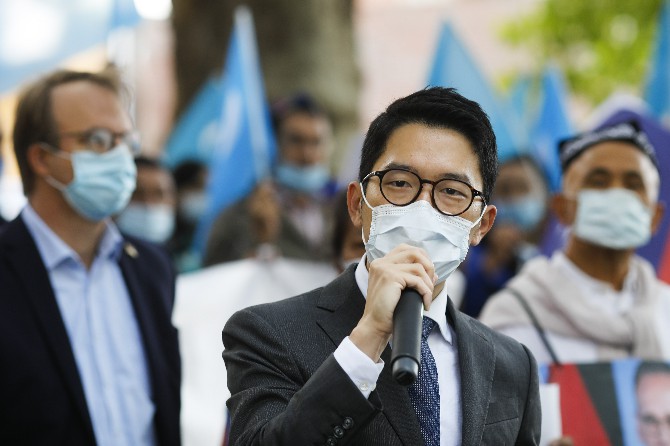 Hong Kong pro-democracy activists demonstrated outside the German Foreign Ministry yesterday as China’s top diplomat visited the capital, urging the government in Berlin do more to try and force Beijing to address human rights issues.
Led by prominent activist Nathan Law, who fled Hong Kong for Britain shortly after China implemented a new national security law, the crowd held photos of imprisoned dissidents and chanted slogans like “free Hong Kong” and “stand up for human rights.”
China’s contentious national security law for Hong Kong is seen by many as Beijing’s boldest move yet to remove the legal firewall between the semi-autonomous territory of Hong Kong and the mainland’s authoritarian Communist Party system.
Law told the crowd of about 100 to 150 supporters that it was “wishful thinking” from Germany and other western nations that China could be convinced to implement democratic reforms with dialogue and engagement alone.
“This authoritarian government is going the opposite way,” he said.
He said the European Union needed to increase pressure on China to respect “basic human rights” and that Germany, which holds the EU’s rotating presidency, could lead the way.
“Appeasement strategies are really, really useless,” he said.
The downtown protest came as German Foreign Minister Heiko Maas hosted Chinese Foreign Minister Wang Yi at an isolated government villa in a wooded area on the outskirts of the city, well removed from the demonstrators.
Wang is currently in the middle of a five-nation European tour, which also includes Italy, France, the Netherlands and Norway. AP