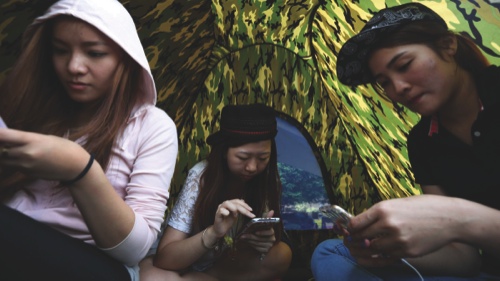 Hong Kong pro-democracy demonstrators finding it difficult to communicate over congested mobile-phone networks are downloading the application FireChat about 100,000 times a day in an effort to stay connected.
Open Garden’s FireChat, which gained popularity during protests this year in Iraq and Taiwan, allows users to send messages using Bluetooth or peer-to-peer Wi-Fi, which is optimal for places where cellular networks are congested.
Protesters massing in Hong Kong’s Admiralty, Causeway Bay and Mong Kok districts are overwhelming wireless carrier networks, making applications such as Tencent’s WeChat and WhatsApp difficult to use. Demonstrators are fueling the 100,000 downloads of FireChat per day among Hong Kong’s 7 million people, said Stanislav Shalunov, chief technology officer of Open Garden.
“The speed with which it was adopted in Hong Kong surprised us, and apparently was just due to word-of-mouth,” Shalunov said. “FireChat is becoming the de facto standard for any activist organizing protests.”
FireChat has attracted 5 million global users, according to San Francisco-based Open Garden’s website. The free app allows users to join different chat groups and create their own after turning on Bluetooth or Wi-Fi on their mobile phones. It works best if the phones are within 10 meters (33 feet) of each other.
“I use FireChat for the sake of finding my friends,” said Rainbow Wong, 21, a student at the University of Hong Kong participating in the protests. “Even if there are 100 people in the chat room, it works.”
The tool could be useful in circumventing controls by oppressive regimes, Shalunov said. Users have experienced difficulties in using the app in China, where the government censors the Web by blocking pornography, gambling and content critical of the ruling Communist Party.
“Mainland China’s government is not our biggest fan right now,” Shalunov said.
FireChat isn’t content with just being a communication tool for protesters. Shalunov said the app also helps people without Internet communicate with each other.
“There are some 5 billion people off the grid, either without access to Internet or who can’t afford it,” Shalunov said. “They are our market, not just revolutions – which don’t happen all that often.”
One hurdle exists, though. All messages posted on FireChat are open to the public, making it unlikely for users to conduct private conversations.
“I think I will only use it in times of crisis,” Wong said. “It’s difficult to find a specific friend, and I don’t want to make my messages public.” Lulu Yilun Chen and Jake Rudnitsky, Bloomberg