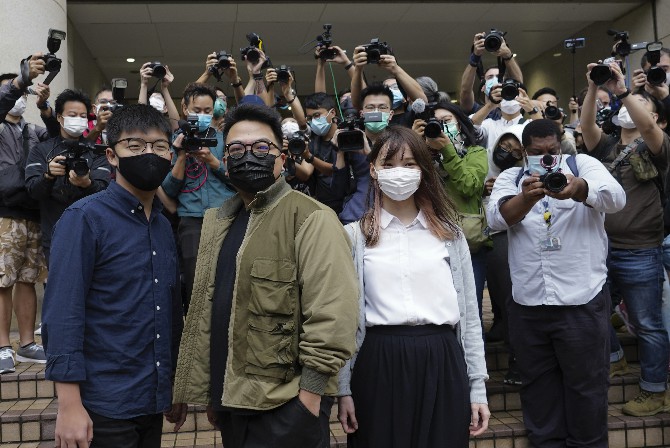 From left: Joshua Wong, Ivan Lam and Agnes Chow arrive at a court in Hong Kong

Prominent Hong Kong pro-democracy activist Joshua Wong and two other activists were taken into custody yesterday after they pleaded guilty to charges related to a demonstration outside police headquarters during anti-government protests last year.
Wong, together with fellow activists Ivan Lam and Agnes Chow, pleaded guilty to charges related to organizing, taking part in and inciting protesters to join an unauthorized protest outside police headquarters last June. The trio were members of the now-disbanded Demosisto political party.
They were remanded in custody at a court hearing yesterday, and the three are expected to be sentenced on Dec. 2. Those found guilty of taking part in an unlawful assembly could face as long as five years in prison depending on the severity of the offense.
“I am persuaded that neither prison bars, nor election ban, nor any other arbitrary powers would stop us from activism,” Wong said, ahead of the court hearing.
“What we are doing now is to explain the value of freedom to the world, through our compassion to whom we love, so much that we are willing to sacrifice the freedom of our own. I’m prepared for the thin chance of walking free.”
Wong rose to prominence as a student leader during the 2014 Umbrella Movement pro-democracy protests and is among a growing number of activists being charged with relatively minor offenses since Beijing in June imposed a sweeping national security law on the territory that has severely restricted political speech.
Pro-democracy supporters have said the legal charges are part of a campaign to harass and intimidate them.
Lam, who also spoke ahead of the court hearing, said he too was prepared to be jailed.
Wong wrote on his Facebook page on Sunday that he and Lam had decided to plead guilty after consulting with their lawyers. The two previously pleaded not guilty to the charges.
Chow had already pleaded guilty to charges of inciting others and taking part in the protest.
“If I am sentenced to prison this time, it will be the first time in my life that I have been in jail,” Chow wrote on her Facebook page on Sunday.
“Although I am mentally prepared, I still feel a little bit scared. However, compared to many friends, I have suffered very little. When I think of this, I will try my best to face it bravely,” she wrote.
On June 21 last year, thousands rallied outside the police headquarters to protest what they said was excessive police force against demonstrators. ZEN SOO, HONG KONG, AP