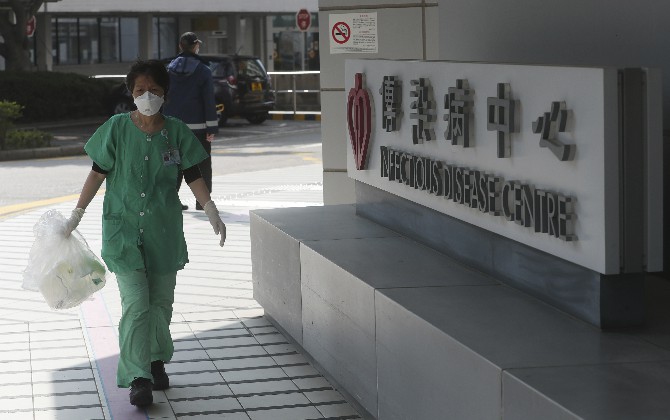 Thousands of Hong Kong medical professionals voted to begin a five-day strike today after the government refused their demand to shut all entry points from China amid a deadly virus outbreak on the mainland.
The Hospital Authority Employees Alliance said there were about 99% of “Yes” votes cast by its members on Saturday. More than 9,000 members have pledged to take part, first in suspending non-emergency services offered by the city’s Hospital Authority before extending it to providing only limited emergency needs, it said.
Hong Kong authorities have resisted pressure from some groups to shut all its borders with China, where the deadly outbreak has killed more than 300 people and infected more than 14,000 others. Hong Kong has at least 14 confirmed cases of the new strain of coronavirus. The government has extended school holidays and suspended residents of China’s Hubei province, where the outbreak is centered, from entering the city.
Measures already announced by the government “are doomed to fail when the government is adamant in refusing to address the crux of the problem,” the union said in a statement after the vote. “As country after country begins to announce the banning of foreigners’ entry from China, the Hong Kong government chooses to keep its doors wide open.
Hours after Hong Kong medical workers voted, the government appeared to open the door for more controls on travel from the mainland.
“The government is examining the infection continuously and will explore further tightening of the management of control points,” a spokesman said. The government appealed to workers “to reconsider their decision” and keep providing service, praising them for “standing fast at their posts.”
The Hospital Authority had a workforce of about 79,000 as of March 2019. The union, established late last year, said the decision to strike “is not an easy one.” The group canceled planned negotiations with the Hospital Authority on Sunday because Chief Executive Lam wasn’t attending, RTHK reported. It said Lam’s refusal to attend means talks had already broken down, according to the report.
Separately, a Hong Kong Executive Council member said that residents should avoid traveling to the mainland or risk having difficulties returning to the city, Radio Television Hong Kong reported Sunday. Lam Ching-choi’s statement was a sign the government could ramp up border-control restrictions. Lam said possible measures include shortening opening times for ports, limiting transportation and introducing laws to curb cross-border traffic, the report said.
A complete closing of the border sought by the workers is “not the right answer” and is not in line with World Health Organization guidelines, Chief Executive Carrie Lam said at briefing on Friday.
Restrictions on travel to and from China have widened as rising fear of the Wuhan coronavirus prompted countries to bar flights, ignoring the guidance of the World Health Organization. Australia joined the U.S., the Philippines and New Zealand in denying entry to non-citizens traveling from China.
Vietnam halted air travel to China, Italy banned incoming flights, and Qatar Airways became the first Middle East carrier to suspend flights to China. Airlines in Australia and the Philippines also announced similar plans on Saturday.
The union also said its members have flagged dangerous situations that have occurred due to a large number of suspected cases, including lack of personal protective equipment and designated quarters for staff handling isolated patients.
Efforts to fend off an outbreak of the novel coronavirus are posing a challenge to Hong Kong’s authorities, notably a citywide shortage of surgical masks that has raised concerns about the government’s preparedness to handle such a health crisis.
The fast-spreading virus has reminded many in Hong Kong of the SARS virus in 2003 that originated on the mainland and killed almost 300 people in the financial hub.
“The most feasible way to fight against the pandemic is to eliminate the sources and then allocate the resources and manpower,” Winnie Yu, chairperson of the medical workers union, said at a briefing Saturday. “For Hong Kong’s future, there is no alternative but to express ourselves through the strike.” Alfred Liu, Bloomberg