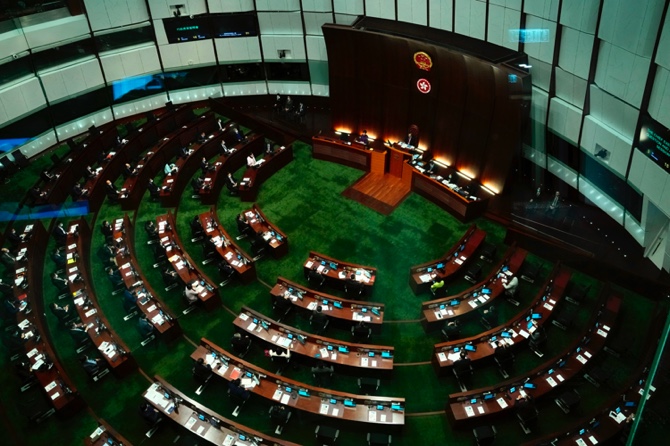 Hong Kong’s legislature convened yesterday for the first time since elections last month that were held under new legislation ensuring that only “patriots” who have proven their loyalty to Beijing could run as candidates.

The 90-seat Legislative Council, known as LegCo, is now completely dominated by Beijing’s allies. Leading opposition figures are in jail, exile or have been intimidated into silence, and non-aligned media outlets forced to close.

The largest pro-democracy party, the Democratic Party, decided not to field candidates rather than lend legitimacy to what it regards as a fundamentally undemocratic process. Just 20 of the seats were directly elected, and the turnout of 30.2% was the lowest since the British handed Hong Kong over to China in 1997. All candidates were vetted by a largely pro-Beijing committee before they could be nominated.

Hong Kong leader Carrie Lam opened yesterday’s session, using the opportunity to criticize former legislators who she said were “anti-China and who have attempted to destabilize Hong Kong, had tried to politicize council businesses and made it difficult for LegCo to fully perform its functions.”

Since the expulsion or resignation of opposition legislators, the council has enjoyed a “fruitful year marked with a constructive and interactive relationship between the LegCo and the executive authorities with remarkable achievements,” said Lam, who along with several members of her government is under a U.S. visa ban.

Chinese President and head of the ruling Communist Party Xi Jinping praised the elections as adhering to the “one country, two systems” principle, referring to the increasingly threadbare framework under which Hong Kong was to retain its own political, social and financial institutions for 50 years after being transferred from British rule.

The elections had been postponed for a year — ostensibly due to a spike in COVID-19 cases — after the opposition swept elections for district counselors.

They followed widespread and increasingly violent anti-government protests in 2019 that prompted Beijing to impose a sweeping National Security Law on Hong Kong, followed by a reorganization of the electoral process and transformation of the makeup of the Legislative Council to stack it with pro-Beijing loyalists.

The session opened as Hong Kong struggles with a new wave of COVID-19 infections related to the global spread of the omicron variant.

Twenty lawmakers skipped the opening session after joining a large birthday party that sparked fears of a new omicron cluster when a guest tested positive for the coronavirus.

Hong Kong has also closed kindergartens and primary schools after infections were discovered among students, banned flights from the United States and seven other countries and held 2,500 passengers on a cruise ship for coronavirus testing on Wednesday as the city attempts to stem the emerging omicron outbreak.

Lam appeared to rule out imposing a new lockdown at this time.

“If we want a stricter approach, we could only stay home — it can only be done with a curfew,” Lam said. “Today I don’t think we are at the stage where we have to apply stricter measures to deal with the pandemic.” MDT/AP