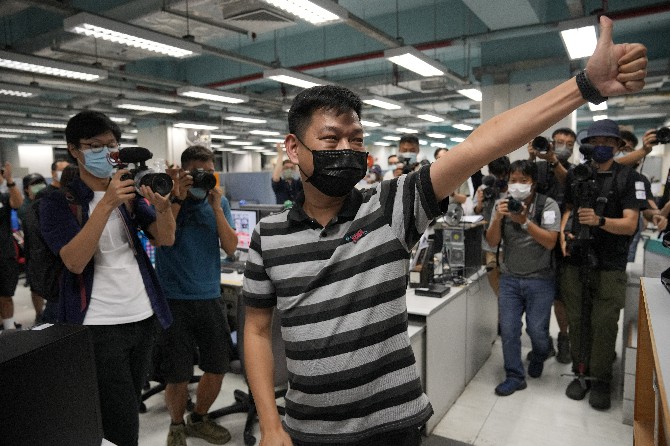 Hong Kong national security police yesterday arrested a former editor at the now-defunct Apple Daily pro-democracy newspaper, weeks after the paper was forced to close after authorities froze its assets.
Lam Man-chung, who was the executive editor-in-chief of Apple Daily, was arrested on suspicion of conspiring to collude with foreign forces to endanger national security, according to the South China Morning Post newspaper, which cited an unnamed source. He is the eighth person from the newspaper who has been arrested in recent weeks.
Two other former Apple Daily journalists — deputy chief editor Chan Pui-man and chief editorial writer Fung Wai-kong — were also detained yesterday after their bail was revoked, according to local media reports.
Chan was among the five Apple Daily executives and editors arrested on June 17, and Fung was first arrested at the airport late last month while allegedly attempting to leave on a flight to the U.K.
Police said that a 51-year-old former editor was arrested yesterday in relation to a similar case in June, but did not identify him. Zen Soo, Hong Kong, MDT/AP