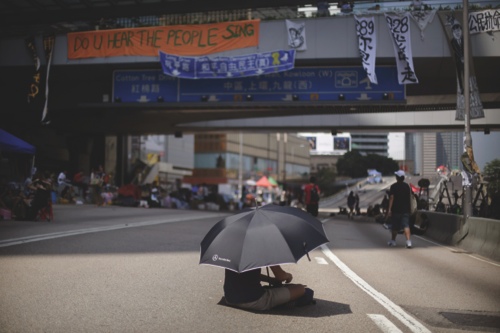 Student-led protests for democratic reforms in Hong Kong shrank yesterday but a few hundred demonstrators remained camped out in the streets, vowing to keep up the pressure until the government responds to their demands.
Schools reopened and civil servants returned to work yesterday morning after protesters cleared the area outside the city’s government headquarters, a focal point of the demonstrations that started the previous weekend. Crowds also thinned markedly at the two other protest sites, and traffic flowed again through many roads that had been blocked.
The subdued scenes left many wondering whether the movement, which has been free-forming and largely spontaneous, had run its course — or whether the students have a clear strategy about what to do next.
Early talks between the government and the students have started, but many disagreements remain. Students say they will walk away from the talks as soon as the government uses force to clear away the remaining protesters.
“This is definitely not the end — we’ve never set a timeframe for how long this should go on. It’s normal for people to go home, to come and go,” said Alex Chow, one of the student leaders. “It’s up to the government now. This is the first step, but the pressure has to continue.”
But yesterday the numbers were down to just a couple hundred in the main protest site of Admiralty and in the Mong Kok area, where some scuffles broke out over the weekend between protests and residents. About 25 protesters, mostly students, refused to budge from their site outside the government headquarters, and some say they plan to stay for as long as they can.
Many remaining protesters were undeterred by the dwindling number of participants, but they admitted they cannot afford to neglect their studies for much longer.
“I think the government is waiting for us to get up. They always say the protests must end and are trying to use violence to stop it,” said Jackie Ho, 18. “But I think they just want to scare us.”
The protesters’ youthfulness and the movement’s lack of central leadership has been part of its appeal. Lawmakers and pro-democracy politicians have played almost no role in the movement, which began as Occupy Central — a campaign founded by law professor Benny Tai last year. But Tai and other Occupy leaders have been overtaken by several different student and grass-root political groups, which have provided much of the coordination and planning.
“The credit goes to the students who brought so many people to occupy the government offices,” said Martin Lee, a veteran pro-democracy lawmaker in the city.
One faction, Scholarism, is led by 17-year-old Joshua Wong and draws many younger students, while the Federation of Students represents mostly university students. Still others say they follow no particular group or leader.
“We support the students, but we are not following their lead. We came out here on our own,” said protester Angel Chan, 27. “People here are here for themselves, and their future, and the future of Hong Kong.”
But now that momentum has faded, it is not clear how its players can sustain what they started.
Differences and confusion within the movement became clear on Sunday, when several leaders announced a retreat from key sites — even as others declared there was no withdrawal, or urged protesters to regroup in one main area.
Suki Lee, 21, said many in the city do not understand why they are persisting.
“I want the government to know this is a very important campaign, to focus, to give some response to us,” she said.
But Louis Chan, also 18, said he was not sure achieving universal suffrage — the students’ original goal — is now likely. He wanted to stay as long as he could, but he needs to return to university to clock his attendance.
“I did think it was possible, but now I don’t think so because they (the Hong Kong government) don’t give any response and China is also very much against this,” he said. Sylvia Hui and Louise Watt, Hong Kong, AP