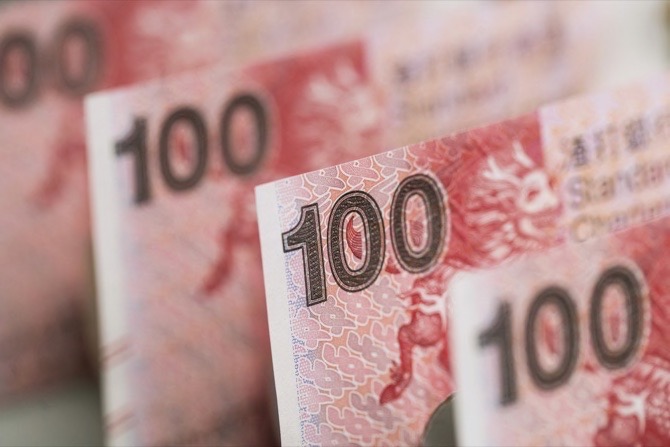 This round of currency intervention in Hong Kong is far from over.

That’s according to analysts, who’re watching the interplay between the amount of money in the city’s financial system and local borrowing costs. Shorting the Hong Kong dollar will remain profitable until the latter starts to go up sharply, and the monetary authority will spend at least another HKD50 billion (USD6.4 billion) defending the peg before that happens, according to Bank of America Merrill Lynch and OCBC Wing Hang Bank Ltd.

Hong Kong’s currency has hit the weak end of its trading band repeatedly over the past week, spurring intervention that’s cost nearly $700 million.

At the heart of the analysts’ calculus is a call on how low the city’s aggregate balance can go before banks start feeling a funding squeeze. That’s hard to judge given the liquidity measure has swung between HKD426 billion and HKD71 billion in the past decade. (When the central bank buys Hong Kong dollars from commercial lenders, the balance goes down.)

Right now, it sits at just over HKD70 billion, low relative to recent history, but the gap between Hong Kong and U.S. borrowing costs remains wide. So there’s little to stop traders selling the city’s dollar and parking the proceeds in the higher-yielding U.S. currency.

“The pressures will continue for money to flow out from the Hong Kong dollar, as long as the rate spread exists,” said Kevin Lai, chief economist for Asia ex-Japan at Daiwa Capital Markets Hong Kong Ltd. Local borrowing costs will become more responsive to intervention when the aggregate balance slides to HKD20 billion-HKD30 billion, he added.

Any spike in interbank rates as a result of the currency operations risks intensifying pressure on the world’s most expensive property market and weighing on the city’s economy. But officials do have a tool to mitigate this – they’ve issued HKD1 trillion of exchange fund bills that, if allowed to mature, would add money back into the system. And the city’s $434.5 billion of foreign-exchange reserves are more than enough to handle the intervention that analysts expect.

The Hong Kong dollar was little changed at HKD7.8497 to the greenback as of 4:41 p.m. local time. The one-month Hibor climbed 3 basis points to 1.55 percent on Friday, extending its advance over the past seven days to 22 basis points.

Here’s what analysts say about the Hong Kong dollar and HKMA intervention:

The HKMA may need to spend another HKD60 billion this year to defend the currency peg; that means the aggregate balance will fall to HKD10 billion by the end of 2019, close to the level seen before the financial crisis in 2008-09 The liquidity drainage will not cause funding conditions to become disorderly because the HKMA can always release liquidity back into the aggregate balance by letting some of its EFBs mature Prime and deposit rates may be raised by 25 basis points, if the aggregate balance falls below HKD10 billion Hong Kong dollar to trade near HKD7.85 in the “foreseeable future” Stock investors may sell the local dollars in exchange for the yuan and buy mainland shares via the trading links; but outflows from Hong Kong will be gradual.

Bank likes to short Hong Kong dollar with forwards in the near- term, as the trade generates positive carry and enjoys low risk of knee-jerk liquidity tightness Current positioning for the trade is lighter compared to the same period last year Such bets need to be “super leveraged” to squeeze substantial returns Interbank rates won’t rise sharply because of the Fed’s dovish stance and a lack of attractive tech initial public offerings in Hong Kong.

One-month and three-month Hibor rates will climb, squeezing the room for short-Hong Kong dollar trades, after the aggregate balance falls below HKD50 billion; this may happen before the end of next week Overnight Hibor won’t rise persistently unless the aggregate balance drops below HKD20 billion One-month Hibor to stand at 1.8 percent by end-March and 2 percent by end-June.

Hong Kong dollar will hover near HKD7.85 throughout the year, and the HKMA will intervene repeatedly in the currency market over the next few months. The aggregate balance will eventually drop to zero; how long this process takes also depends on U.S. monetary policy Hibor will rise significantly after the liquidity pool drops to zero A prime rate hike is still possible this year Foreign capital inflows into Hong Kong seen early this year may have more or less stopped.

The size of short-Hong Kong dollar trades is not as significant as last year, as investors have become more cautious following the drops in the aggregate balance. The aggregate balance may fall to HKD60 billion this month, HKD50 billion in April or May, and HKD20 billion sometime next year. Tian Chen, Bloomberg