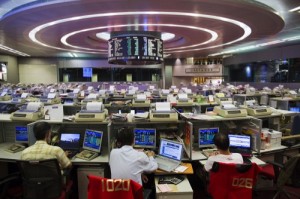 China is opening its stock market wider to foreigners, approving a cross-border trading link yesterday that will allow investors in Shanghai and Hong Kong to buy and sell shares on both exchanges.
In a joint statement, the China Securities Regulatory Commission and Hong Kong’s Securities and Futures Commission said trading via the long-awaited Shanghai-Hong Kong Stock Connect link would start on Nov. 17.
Approval had been widely expected to come in October but was delayed as Hong Kong was roiled by pro-democracy protests that shut down some streets in the financial district. China’s Shanghai Composite stock index rose 2.3 percent on news of the approval. Hong Kong’s Hang Seng was up 1.6 percent.
Foreign access to China’s stock markets is closely managed, mainly through a quota program for institutions that represents a sliver of the overall market.
While Hong Kong is officially considered a part of China after Beijing regained control of the former British colony in 1997, the Asian financial center has its own separate legal and financial system and currency.
China’s stock markets have languished since hitting a peak in 2006. They have largely been a vehicle for the government to recapitalize struggling and inefficient state-owned companies rather than a source of capital for up-and-coming private businesses as in other countries.
The trading link is also expected to promote international use of China’s tightly controlled currency as well as boost Hong Kong’s role as a hub for yuan trading. China is gradually loosening controls on its currency and movements of capital. But it is likely to be many years before its financial markets and banking industry are sophisticated enough for full liberalization.
Authorized investors in both cities will be allowed to buy and sell up to 23.5 billion yuan (USD3.8 billion) of stocks in certain companies each day through the link. Mainland Chinese investors will get up to 10.5 billion yuan of that daily limit, while investors in Hong Kong get the rest.
To prepare for the launch, numerous training and education sessions were held and market participants also had to agree trading rules and other operational arrangements.
“The stock exchanges and the clearing houses have completed a series of market rehearsals with market participants in both markets and reported that the systems are ready and contingency plans are in place,” the regulators said in a statement. Kelvin Chan, Business Writer, Hong Kong, AP