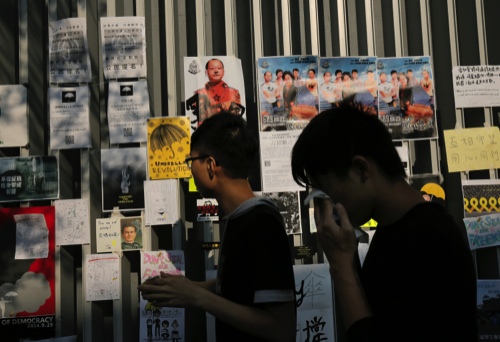 When Beijing cracked down on student protesters in Tiananmen Square in 1989, Bobby Yim was among many in Hong Kong who sympathized with the demonstrators and angrily denounced the Chinese government. But 25 years later, his views on China have changed — and he couldn’t muster any support for the students now clamoring for democratic reforms in his own city.
“Yes, the Chinese government was wrong then. But we were very emotional. Looking back, if the students had won, would China be where it is now?” said Yim, a retired insurance manager out for a stroll at a mall in Taikoo Place, a few subway stops from the main protest site. Yet there was almost no sign here of the turmoil that has rocked Hong Kong.
“The kids occupying the streets now are dragging the whole society down. I think the economy and people’s livelihoods are more important that what they are asking for,” he added. “I tolerate them, but only to a certain degree.”
Yim’s views are echoed by many of the older generation in this city of 7 million, which has been deeply divided over Hong Kong’s student-led pro-democracy protests pushing for a greater say in choosing the city’s leader.
The scale and youthfulness of the movement, the largest and most dramatic since the former British colony returned to Chinese rule in 1997, has captured the world’s imagination, but many Hong Kongers who consider themselves older and wiser have stood by watching with skepticism.
Typically middle-class, middle-aged and proudly pragmatic, these opponents of the protests bristle at the notion that the teenagers and 20-somethings camping out on the streets represent Hong Kong. They call themselves the “silent majority.” Although most do not identify with the Chinese Communist Party, they are some of Beijing’s best allies in the city and embrace mainland China’s development model that has prioritized economic development over political reform.
One of the most repeated arguments in the anti-protest camp is that with growing integration into the mainland’s economy, Hong Kong cannot afford to rock the boat and anger Beijing. They also argue that political reform cannot come at the expense of economic turmoil, and that Western-style democracy is no quick fix for the city’s problems, which range from stark economic inequality to a shortage of affordable housing.
“This is very romantic, but what about our lives? People want democracy, not hooliganism,” said Robert Chow, a former radio host who co-founded the Silent Majority for Hong Kong campaign last summer when the first threats of a civil disobedience movement surfaced.
Chow, who is also the spokesman for a pro-Beijing political alliance, believed most residents favor democracy but prefer gradual, orderly change. Many of his supporters’ beliefs sound strikingly similar to Chinese state propaganda, which stresses the importance of social harmony and economic stability.
But Chow rejected the notion that all who opposed the protests were pro-Beijing, and said his supporters came from all walks of life. 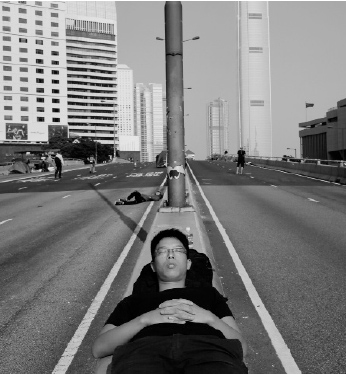 “The protesters have basically taken the law into their own hands,” he said. “At the moment the common people are suffering.”
Chow said a petition last year rejecting the Occupy Central movement — a grassroots political group that first suggested blocking streets as a tactic — garnered 1.5 million signatures, representing one in five people in Hong Kong. Rivals have argued that the numbers are not representative because anyone, including tourists, can sign.
For the moment, it looks like Chow’s camp has won. Support for the protests is fast waning among the city’s residents, who turned out en masse to oppose Beijing’s restrictions on nominees for the first-ever direct elections for Hong Kong’s leader, promised in 2017. The numbers thronging the streets swelled to tens of thousands after police on Sept. 28 fired tear gas and pepper spray on unarmed and mostly peaceful students, and the crowds occupying the streets paralyzed three areas in the city center for days.
But as the week wore on, grumbles about the protests ruining businesses grew louder, and blue-collar workers — shopkeepers, cab drivers and delivery men — joined with those in the finance and tourism industries to condemn the movement.
Analysts say political participation is not a priority for those at the bottom of the economic ladder because they are struggling just to pay the bills. Official figures show that average wages for people with lower skill sets was HK$10,000 (USD1,290) a month last year — and 13 percent of residents earned less than half that.
“The great majority of ordinary people have tremendous pressure in their daily lives. Those people … have to spend more than 10 hours just to earn an income to support their families,” said Ding Xueliang, a social sciences professor at the city’s University of Science and Technology. Agitating for political reform “would be a big luxury for them.”
There’s also a strong generational divide. Those in their 40s and above vividly recall life before the economy took off in the 1980s, when most people still worked in factories and when parents struggled to feed their children. Many feel they have built up Hong Kong with their hard work, and are loath to have their now comfortable lifestyles threatened by political chaos.
Alex Wong, a 40-year-old teacher who joined the street protests, said he understood his peers’ disapproval, but he also saw value in the new generation’s idealism.
“I don’t blame people for bowing their heads to reality,” he said. “But it’s the kids who have many more years to live. It’s them who need a future to look forward to.” Sylvia Hui, Hong Kong, AP