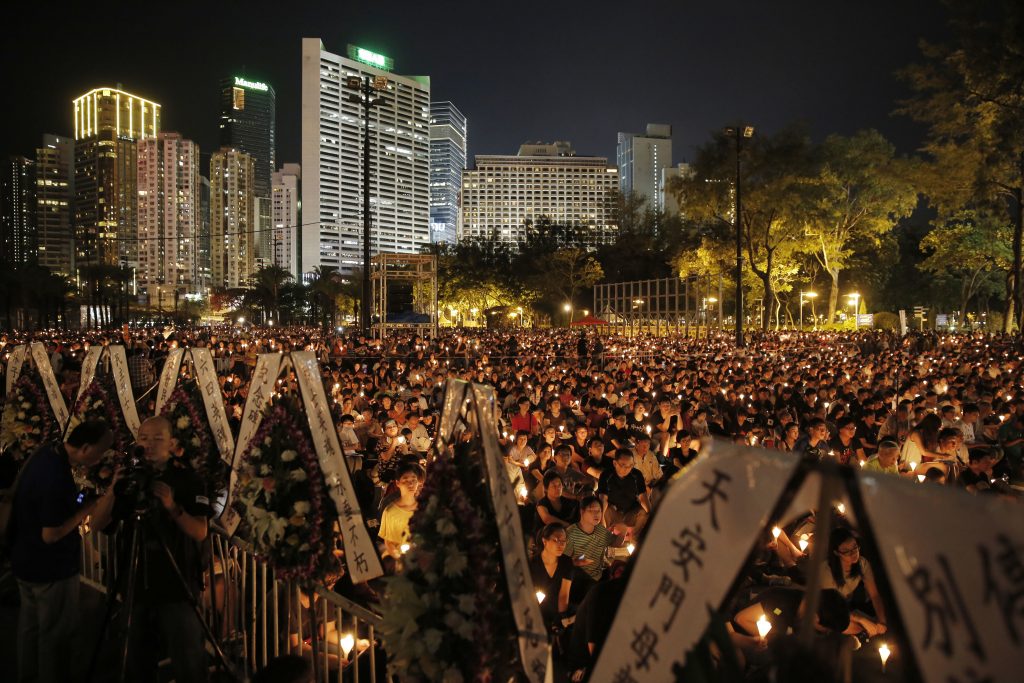 Tens of thousands of people attend a candlelight vigil at Victoria Park in Hong Kong, today (Saturday, June 4) to commemorate victims of the 1989 military crackdown in Beijing. (AP Photo/Kin Cheung)

HONG KONG (AP) — While Hong Kongers crammed into a park today (Saturday) to remember the victims of China’s bloody crackdown on protesters in Beijing’s Tiananmen Square 27 years ago, many student groups held rival events in a sign of the widening rift in the city’s pro-democracy movement.

The annual evening vigil at Victoria Park is the only large-scale public commemoration of Beijing’s brutal crackdown held on Chinese soil. About the only sign in Beijing that it was the anniversary of the crackdown was the tightened security around Tiananmen Square.

Hundreds, possibly thousands, of people were killed as tanks and troops converged on Beijing on the night of June 3-4, 1989. The topic remains taboo in China and any form of commemoration, whether public or private, is banned.

Organizers in Hong Kong said 125,000 people attended today (Saturday)’s vigil, but the crowd appeared to be smaller. Police gave an estimate of 21,800.

Missing from the crowd were the student groups that had been longstanding supporters of the vigil. Instead, a dozen student organizations held discussion forums on the city’s future. The move underscores the split that emerged between younger and older generations of pro-democracy activists over the idea of Hong Kong’s identity following 2014 protests over the Chinese government’s decision to restrict elections in the semiautonomous city.

It follows the decision in April by student leaders to quit the Hong Kong Alliance in Support of Patriotic Democratic Movements in China — the vigil’s organizer — because they believe one of its main aims, fighting for democracy in mainland China, is no longer realistic. They also think the vigil’s formulaic format fails to appeal to the younger generation.

Lily Wong, a 21-year-old legal assistant, attended the vigil with her friend Cecilia Ng, 19, a recent high school graduate. They didn’t disagree with some of the criticisms leveled by the student groups, such as the vigil’s repetitive format and that it was dominated by Hong Kong’s main pro-democracy group, but said it remained important.

“This is not a perfect event, but there are some meaningful things for us,” Wong said. “It is very important for Hong Kong.”

In Taiwan’s capital, Taipei, Wu’er Kaixi, one of the student leaders of the 1989 Tiananmen protests, was among about 200 people who gathered at Liberty Square for a memorial event.

“The spirit of June 4 is an act of courageous humans pursuing the universal value of freedom,” Wu’er said. “This spirit will not be crushed under machine guns and tanks. It will not die because of (the Chinese government’s) suppression.”

In Beijing, police checked IDs and searched the bags of anyone seeking to enter the environs of Tiananmen Square, where thousands of students, workers and ordinary citizens gathered in 1989 to demand political reforms. Journalists from The Associated Press were stopped, filmed and ultimately forced to leave the area, ostensibly for lacking proper permission.

Ahead of the anniversary in China, family members of those killed in the crackdown were placed under additional restrictions. At least half a dozen people were reportedly detained in recent days for attempting to commemorate the events.

The U.S. State Department called for a “full public accounting of those killed, detained, or missing and for an end to censorship of discussions about the events of June 4, 1989, as well as an end to harassment and detention of those who wish to peacefully commemorate the anniversary.”

Asked Friday about the anniversary, Chinese Foreign Ministry spokeswoman Hua Chunying said China had “long ago reached a clear conclusion about the political turmoil at the end of 1980s and other related issues.”

China’s explosive economic growth in the years that followed “proves that the path of socialism with Chinese characters we chose to follow … is in line with the fundamental interests of the Chinese people, and it represents a wish shared by them all,” Hua told reporters at a daily news briefing. 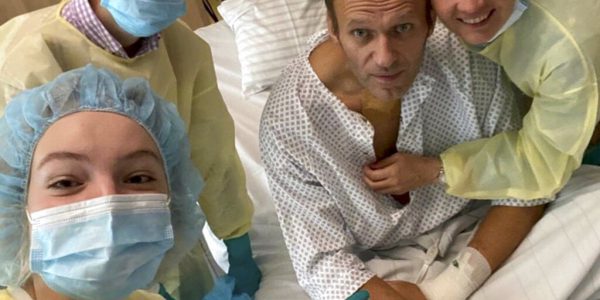