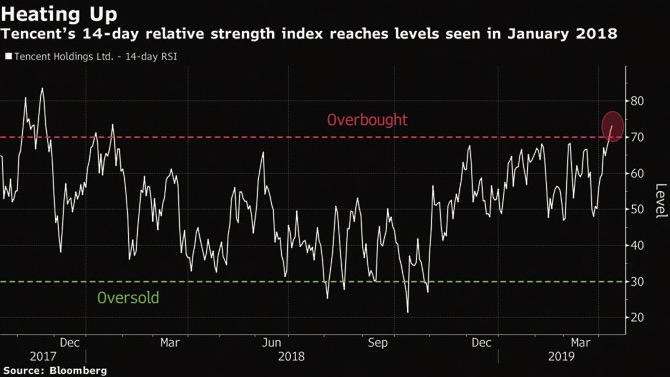 After powering Hong Kong’s equity benchmark into a bull market, Tencent Holdings Ltd. stood out as the only bright spot in the city yesterday.

The Internet giant rose as much as 3 percent, briefly trading above HKD400 for the first time in 10 months, after winning regulatory approval for one of its mobile games in China. It was one of the only two gainers on the Hang Seng Index, which fell 0.9 percent at the midday break. The shares are now approaching HKD405 – the price at which a major shareholder cut its stake last year that then triggered a wave of selling in the stock.

Sentiment over Tencent had been improving after its first licenses to operate new games in China, and amid optimism over new businesses. The rally has seen the stock outperform the Hang Seng Index by the most since July and just 5.4 percent short of analysts’ price targets. After plunging 23 percent last year on a run of bad news including a rare profit decline and a regulatory crackdown on gaming, brokerages had trimmed their 12-month price forecasts.

Tencent’s 55 percent rally since its October low has pushed the stock’s 14-day relative strength index to the highest since January 2018, above the 70 level that signals an asset may be overbought to some traders. Bloomberg